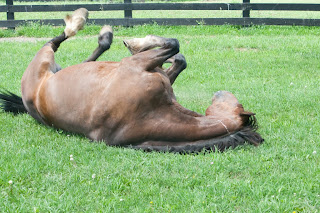 If given the opportunity, rolling is one of the few pleasures a horse has. It is something he can do for himself. He will use it for pleasure on the snow packed ground. He will roll in the mud and dirt right after you just spent an hour grooming him. What you didn’t realize is that he is putting the finishing touches on your grooming job by shedding the excess moisture and getting his hair just the way he likes it.

Yes, as Elizabeth Hess said in Horse Heaven: Escaping the Plate - “rolling is palpable horse joy.” When I first read this phrase, it resonated deeply with me because I knew that watching a horse roll is one of the great pleasures in life if you love horses. Dogs enjoy a good, satisfying roll and so do those “drop and roll” cats – looking for a belly rub. But watching these gentle graceful giants roll is truly a sight for sore eyes.

Bobby II Freedom, a former New York City carriage horse, was rescued from the slaughter auctions in June 2010 by the Coalition to Ban Horse-Drawn Carriages, Equine Advocates and Friends of Animals. When Bobby stepped out of his horse trailer after the long ride from Pennsylvania to the heaven that is the Equine Advocates Sanctuary, one of the first things he did after picking up the scent of other horses, hay and grass was to chew a mouthful of grass and drop to his knees to begin a long and luxurious roll. When one considers what kind of life Bobby had until that time, it is easy to see why.

As a carriage horse in NYC, Bobby lived in a small stall, probably no bigger than 48 square feet, which was the minimum legal requirement – now it is 60 sq. ft, which is still far too small for even a standardbred. Bobby had no opportunity for turnout – no paddock -- no pasture. As a work horse, he went from the confines of the shafts of his carriage, in which he was legally allowed to work nine hours a day, seven days a week, to the confines of his stall. Life was not good. He had to put up with it.

Susan Wagner, president and founder of Equine Advocates and Bobby’s new care giver knows about the value of rolling and added that “urban carriage horses that never have turn-out are also often denied the opportunity to assume all of their natural postures, including that of lateral recumbency, which happens when the horse is completely lying down flat on his or her side with legs stretched out. This position allows the animal to meaningfully lie down and be completely at rest. More often, horses confined to small stalls with no turn-out can only assume the more cramped position of sternal recumbency where the animal is lying down on his or her chest with legs tucked up.”

At Equine Advocates Sanctuary, the horse stalls are all at least 12’x 12’ providing Bobby with the digs he so richly deserves. 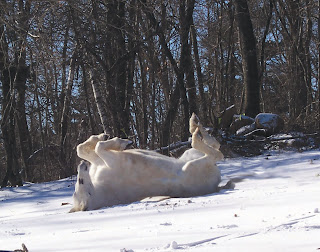 All horses instinctively love to roll. They do it after grooming, after confinement, after heavy exercise. It makes them feel good. In the summer and fall, the extra layer of dirt they get from rolling helps to protect their skin from bug bites. I cannot imagine what it must be like not to have this option. Dispirited horses put up with a lot – they have no choice. But they are being deprived of one of their great pleasures in life.

Experts suggest that horses be given the freedom to roll – that besides being fun and putting the finishing touches on their grooming, it also plays a very important part in a horse's health. When a horse rolls, he is stretching the muscles in his body, keeping him healthy and flexible and helping him to relax.

The Coalition to Ban Horse-Drawn Carriages has been actively campaigning for a ban of the carriage industry in New York City since 2006. This traffic congested city is no place for a horse who cannot live a natural life. Instead he is exploited as part of a frivolous industry and cast aside when no longer needed. This is a movement that is being seen and heard around the world.

(Please note that rolling is normal but a colicing horse can also roll because of pain. It will appear different and you should seek help. )

The first picture above shows Bobby after he came out of the trailer at Equine Advocates. Photo credit: Jim Craner:

That is a happy horse! Too bad the New York City carriage horses never get a chance to roll around or play with each other.