OPEN LETTER TO THE ASPCA by Donny Moss - director of Blinders: The Truth Behind the Tradition 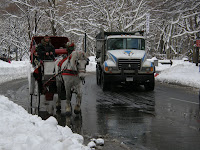 This afternoon, someone forwarded to me an e-mail from the ASPCA's equine vet, Pam Corey. She was defending the ASPCA against all the complaints they have received about not doing a good job concerning the NYC carriage horse issue. NYC has recently been hit with quite a bit of snow and icy conditions and the criticisms were well founded.

But no one hit it quite on the head with such a sense of completeness as Donny Moss, the director of the award winning documentary about the carriage industry, known affectionately as Blinders.


In 2008, his documentary was released. Donny has continued to be a strong advocate for the carriage horses and for ethics in politics.

First off: this is Pam Corey's response to criticism:

Since December 1st, New York City carriage operations have been suspended 12 times by ASPCA agents due to weather issues or cold temperatures (18 degrees in the winter.) The park drives are patrolled to evaluate safety of the surfaces and when icy or >slippery, the horse carriages are sent back to the stables. No horses left their stables today, February 1st, due to the ASPCA's suspension this morning, due to slippery roads. Despite the fact that NYC Parks and NYPD officers, as well as inspectors from the city's department of health and department of consumer affairs must enforce the laws regulating carriage horses,

The ASPCA agents are the only ones that travel to Central Park to examine the road conditions and take the air temperature. Complaints to this department from around the country state that the ASPCA does nothing to protect the horses. Our continued monitoring of the park and response to complaints shows that this is not true.

thank you for your concern about the carriage horses, we share it.

REBUTTAL: this is from Donny Moss

In response to your message, perhaps the following reasons explain why people around the country complain to the ASPCA about your handling of the carriage horses:

1. The ASPCA is silent when your voice is needed the most. At the Mayor's public hearing on the carriage operator rate hike bill, Bloomberg stated, "The ASPCA has convinced me that the horses are treated humanely." Why weren't you at that critical hearing in front of the cameras to correct him and to testify in support of a ban? He could have vetoed the bill.

2. The ASPCA did not show up to Council Member Avella's press conference announcing the bill to ban horse-drawn carriages. Why? Because you were absent in the press at that critical moment, NYers were left with the impression that it was just a bunch of animal rights extremists who support of a ban.

3. The ASPCA pulled out all the stops to preserve your oversight of the carriage industry when a bill was being considered to take it away from you. Why don't you put that energy into fighting for a ban?

4. The ASPCA wasted hundreds of thousands of dollars of your donors' contributions on a lobbying firm that you ultimately fired instead of just using your board of directors, your influence in the City, celebrity spokespeople and PR machine to publicly demand a ban.

5. The ASPCA has fostered an environment where carriage operators are comfortable defying your authority and the law. What, if anything, are the consequences for them?

6. The ASPCA allows the industry to state to the press that the ASPCA has never issued a cruelty summons. Could that possibly be true?

7. The ASPCA continues to give the public the impression that you're monitoring the industry and protecting the horses when, in fact, your presence is sporadic at best and your absence is palpable on weekends, when the horses are working the most.

8. The ASPCA has publicly thanked Christine Quinn for pushing two marginal bills through the City Council at the expense of the carriage ban and other meaningful bills.

9. The ASPCA's board member, Cindy Adams, wrote a column in the NY Post in April, 2010 congratulating Speaker Christine Quinn and the ASPCA for the passage of the industry bill that would give the drivers a rate increase but precious little for the horses. Why did the ASPCA not demand a retraction?

Posted by Elizabeth Forel at 6:31 PM

Yes stop the horse abuse in NYC, they will be turned into dog food instead, which one is the lesser of the two evils?

you rock donny. i see a day when the carriage trade will end and you will be one of those we will have to thank for it.

The ASPCA will never have the reputation it hopes for in regard to helping horses until it takes care of what is right in front of it. That would be New York City!!! And, that would be Central Park!!! And, that would be the carriage horses!!!. The ASPCA must not only be responsible for the enforcement of the laws protecting the horses, it must also advocate for them publicly at every turn and that includes in City Council hearings and on the steps of City Hall.

As for the City's current administration, It is strange to me that the it apparently manages very well to take good care of the horses in the Equine Unit of the Police Department and simultaneously plays dumb when evaluating the conditions of the carriage horses. That might have something to do with the fact that the City clearly doesn't give a damn about them.

Dr. Corey's letter and this factual and most compelling response must not remain as an "Open Letter" on a blog but sent certified (with signature)to her. This honest discourse may (must!) be the key to resolution.

It is shocking to hear that Mayor Bloomberg's own horse-loving daughter could have such blinders to their plight.

Well said Donny! I got the same 'standard' response when I wrote them yesterday about the horses. It's all lip service and no action.

Regarding the comment about the horses being used for "dog food" if they are banned. This is a scare tactic directed to the people who care about the horses and do not realize that most of them go off to the auctions now. In the last five years AT LEAST 300 HORSES DISAPPEARED off the Department of Health rolls. The way the law is written, there is no accountability by the industry when a horse changes hands outside the state. The new bill Intro 86 A addresses that. All the "retired" horses would have to be adopted by a good home or given to a sanctuary. No more auctions!!! No more slaughter houses.

"The ASPCA allows the industry to state to the press that the ASPCA has never issued a cruelty summons. Could that possibly be true?"

"Short of getting a stronger law passed, the ASPCA monitors carriage horse activities and has issued summonses in the past for running red lights, “overloading” and various other violations. However, the "violation" category requires that our HLE officers witness the infraction in order to take action."

Though you'd never know it, by the silence of the ASPCA, on the issue

Above excerpt, taken from:

Should clarify. I think most reasonable people would see "Overloading" as cruel, though perhaps that is not why summonses are issued, for it.