FIRE IN CARRIAGE HORSE STABLE IN VANCOUVER -- WHAT ABOUT NYC? 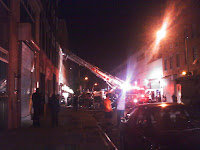 A recent fire in a horse drawn carriage stable in Vancouver, Canada caused over $50,000 in damage but fortunately none of the horses were in the facility at the time.

This past August, an electrical fire broke out at Chateau Stables. We were told that there were no injuries of either horse or human but there appeared to be quite a bit of damage. See this video on Youtube.

I don't know what the fire protection requirements are in Vancouver. But I do know New York City. Sprinklers are not a legal requirement for horse stables in this supposedly #1 city. It is solely up to the discretion of the owner. So although stables generally house very flammable material -- such as hay, wood stalls and carriages ...not to mention the precious lives of the many horses who are stuck on the upper floors and whose only means of egress is the ramp, which will act as a chimney if there is a fire, sprinklers are not required. This picture below is at West Side Livery and shows their "fire protection" system. 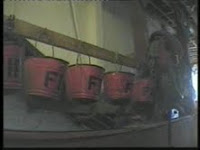 To add insult to injury, in February, the Department of Health (DoH) proposed the following changes to Article 161 of the NYC Health Code. The DoH rescinded the proposal when Intro 35-A was passed. Intro 35-A was an industry bill, which gave the drivers a rate increase. It did not address this issue.

(6) Fire hazards. Premises shall be kept free of fire hazards. Effective July 1, 2011, all buildings in which stables are located shall be equipped with an operational sprinkler system installed in accordance with §BC903.3.1.1 of the New York City Building Code, or successor provision. (8) Electrical wiring. (A) All electrical appliances shall be plugged directly into properly grounded electrical outlets. (B) Electrical wiring shall be installed and maintained in metal electrical conduits. (C) Extension cords may be used for brief periods of time, not to exceed three (3) hours, and 25 such cords shall be disconnected and removed when the appliances or tools to which they are connected are not being used.

Fire Safety in Barns is a website dedicated to preventing deadly fires in barns and stables. It is must reading for any municipality that wants to take this issue seriously. Take a look at the chart on this site Loss of Animal by Fire. It is devastating and much of it could be prevented. Yet it contains only fires that were reported to the media

We think this is outrageous. What hold does this tiny carriage industry have over the legislators. Lives are at risk.

Please call or write Speaker Christine Quinn and other NYC Council members - click here. And send an e-mail to Mayor Bloomberg by clicking here. Tell them to pass a law to require sprinklers in horse stables. It is way past time.

Posted by Elizabeth Forel at 5:56 PM


A great article indeed and a very detailed, realistic and superb analysis, of this issue, very nice write up, Thanks.DurastallTM Australia is the leading Horse Stable supplier having designed and constructed stables for the Sydney International Equestrian Centre
the horse is the super first and beautiful animal.


This is an intresting blog that you have posted, you shares a lot of things about Electrical Design, Fire Protection NYC and Sprinkler System New York. Which are very informative for us. Thanks