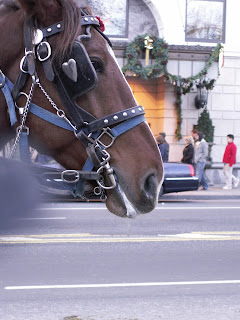 Posted by Oliver at 9:00 AM No comments:

Damn - I just knew this would happen. Now we have two drivers who believe they should be the Tourist Ambassador to New York City. Both are featured in youtube videos.

Which one would NYC and Company, the Administration's tourist agency, like best? Which one would Council Member Oliver Koppell like best? After all, he loves this industry and would probably want to weigh in on the selection.

Which one do you like best? It is a very tough choice.

Warning: this is for adult ears only.


The first contender, we shall call him Tie-die, demonstrates his ability to engage passersby. See him in his own feature film. Notice how he leaves his horse unattended while he hysterically runs down the street.

The second contender shall be known as OJ. He practices his use of the English language and also demonstrates his ability to speak with tourists. He has a very large vocabulary. He also stars in his own feature film. I hate to think what he does to his horse when he is upset, which is probably often.

The administration is rightfully proud of this tourist attraction.