It's March 2011 and counting. By January 2013, the race for mayor should be in full swing. September 2013 … Primary Day. At this point, it seems like it might be a packed house – at least according to AM-NY, which recently ran a story about the hopefuls. Click here.

TOP CONTENDERS: The top contenders mentioned in the article were Bill Thompson, Anthony Weiner, Christine Quinn, Scott Stringer, John Liu and Bill DeBlasio. A side bar in the paper version mentioned long shots, but still possibilities, as Tony Avella and Marty Markowitz. This, of course, is just for the Democratic primary. A wealthy dark horse could step up at any time as Mr. Bloomberg did in 2001 and knock everybody out of the race with the dazzle of money. 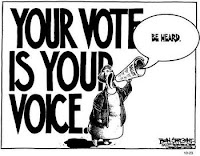 For those of us who care about NYC’s animals and how they continue to be short shrifted, immediately cross Christine Quinn and John Liu off the list. Quinn is so far successfully manipulating some of the large ineffective animal organizations into promoting her as being good for animals. She is not and never has been. The bills she recently passed were pathetic, light weight bills that were either unenforceable or would do little to nothing to help animals. Visit this blog for more information.

By animal issues, I specifically mean the ongoing dreadful city shelter catastrophe, where killing cats and dogs daily is the name of the game ... and the ongoing exploitation and institutional abuse of the carriage horses, all in the name of tourism. Of course, the other issue that needs thoughtful and compassionate consideration by a wise executive is the wide spread slaughter of geese that has nationally shamed NYC.

As for Anthony Weiner, he thinks he can be coy by not addressing these hot button issues, but apparently feels comfortable with other issues like opposing the new bike lanes. See the most recent story in the Gothamist.

STRINGER & DEBLASIO: Are Scott Stringer and Bill DeBlasio really planning to run for mayor? That is the question – but here’s the rub if you care about animal issues in NYC …

Manhattan Borough President Scott Stringer was elected to his current post in 2003. Although he was only supposed to serve for two terms, he decided that he wanted to run for another – to go against the will of the people. It was too irresistible to stay in office. This disrespect of the people who elected him will forever remain stuck in the craw of many. Recently Mr. Stringer was the recipient of a fund raiser directed to people interested in animal issues ... trying to get on their good side; trying to talk the talk.

The truth is that Mr. Stringer has done nothing for either the carriage horses or shelter animals in his nine years in office – not even to use the bully pulpit of the Borough President’s office. Think about it … 9 years … approximately 70 carriage horses disappear off the rolls of the Department of Health per year x 9 … that’s a minimum of 630 horses unaccounted for; 9 years … a minimum of 205,390 cats and dogs killed at Animal Care and Control. [these numbers are taken from the web site of Animal Care & Control of NYC.]

And Mr. DeBlasio as the Public Advocate is no better. Recently an article “written” by Bill DeBlasio appeared in the Huffington Post supporting the electric car bill – Intro 86A – a bill that would substitute vintage replica hybrid cars for the horse carriages, phasing them out over three years. The article was most likely written by someone at NY Class, the organization that supposedly wants this new industry to happen. The only problem is that they have been working on it since 2008 and have never produced a prototype. It is a bill in concept only.

Mr. DeBlasio also did not mention the suffering of the horses in his article; he did not even acknowledge that it is actually Intro 86A, which addresses horse disposition and prevents them from going to slaughter, thanks to our intervention on this bill with Council Member Melissa Mark Viverito, the sponsor.

The sad truth is that Mr. DeBlasio has done nothing for either the carriage horses or the shelter animals in his eight years in office as a Council Member and his one year as Public Advocate – not even to use the bully pulpit of the Public Advocate’s office.

So why should those of us who care about animals support either one for mayor? They are all talk and no action, but they know the animal community is ripe with suckers born every minute. They both know you are an easy mark. Maybe because animal people are so desperate – always looking for a pied piper.

My advice to both Mr. DeBlasio and Mr. Stringer is to actually DO SOMETHING FOR THE ANIMALS. Make us want to support you. Don’t take the “animal” vote for granted because you will not get it.

My advice to animal people is to research all of these candidates and see for yourself. Don’t accept what the “big” organizations say. Question all motives.

This is the most important piece of advice I can impart: The City Council is not a democratic body. Only bills that are supported by Speaker Christine Quinn go anywhere. Council members know this but play the game and “sponsor” bills anyway so they look “good” to their constituents. But I am sorry to tell you that it means nothing because when push comes to shove, it is their vote that counts when and if action is taken on the bill. It is about who stands up to be counted.

A few years ago, a bill dealing with a resolution on humane education made it to a vote. It listed over 40 Council Members as supporters. A naive person would expect that the bill would pass since there are 51 council members and the majority clearly supported this bill. But the bill failed miserably when it came to a vote. Most of those council members voted the way Christine Quinn wanted them to and she was opposed to it.

SENATOR TONY AVELLA: I think a draft Tony Avella for Mayor movement looks better every day. Here is someone who put his career on the line and introduced the historic bill to ban horse drawn carriages in 2007. That took a lot of courage. Albany is lucky to have a state legislator with the drive and integrity of Mr. Avella who won the state senate seat from Queens in 2010. Recently, he reintroduced a bill to ban foie gras – a particularly cruel practice of force feeding ducks for a frivolous pate. See Senator Avella’s home page on the Senate web site.

-- Know the issues and the facts.
-- If you are not already a Democrat, register to vote now in the Democratic primary, which will be held in September 2013 – because this will be where the action is. Don't wait until the last minute.
-- Join a local Democratic club and get active. At some point, they will endorse a candidate for mayor and you will be able to vote and offer your opinions and affect the decision.

And please support our ongoing campaign. We are independent and tireless. We are currently looking for a City Council member who will support a stand alone bill to save the horses from the slaughter auctions.

to elaborate on John Liu... He was a co sponsor of Intro 653,the bill that rewarded the carriage industry by giving them a raise, with no real givebacks. He had little to no positive record on animal issues when in the City Council.

Agree with the writer that Liu and most certainly Quinn, are non-starters, for any animal activist who's paying attention. Stringer and DeBlasio are only worth a look as they, to my knowledge, have never been antagonistic to animal issues. Hardly a reason for them to merit the support of animal activists, however. Until and unless DeBlasio (his NYClass support, notwithstanding) and Stringer take some substantive action, in support of NYC's suffering and dying animals, they are not worthy of the support of the pro animal community.

I know of nothing constructive that Anthony Weiner has ever done for animals, either. In fact, when Weiner was in the New York City Council, he introduced a bill that would have banned "dangerous" dogs from public housing. I believe that any reasoning animal activist would see the dangers involved in that bill. It would be a back door attempt at BSL. And what would the definition of "dangerous" be?

Thompson has been lauded for his audit exposing the NYC carriage horse industry. However, we now know that he kept that audit under wraps, and released it, kicking and screaming, only after a news reporter questioned him about it, and public exposure was imminent.

If State Senator Avella can be induced to make another run at City Hall, he would deserve the unqualified support of all animal activists, I think. Avella is also a progressive voice on other issues: so important in the light of where we're heading, politically and socially, these days.

" they know the animal community is ripe with suckers born every minute."

It takes a time that in Election we must be admit that it has a lost and a win. Election is not an easy task in voting that’s why we must need to be select and to be wise in voting.

Greg | Election in the Philippines

This is a topic that is close to my heart... Take care!
Exactly where are your contact details though?
Also see my webpage: Solar light