We remember Smoothie...
12-year old carriage horse  who died on the street seven years ago
September 16, 2014

One of the most tragic incidents in recent history in the NYC carriage trade occurred in the late afternoon of September 14, 2007 on the hack line bordering Central Park.  A 12-year old mare named Smoothie, hooked to a carriage, was waiting for a fare.  In other words -- she was "parked."  Her driver was obviously not paying attention to her – probably off talking to his buddies.

It is illegal to leave your horse unattended and untethered, which Smoothie undoubtedly was.  This is nothing new, we see it often.  The street laws are generally not enforced.  They were not then and they are not now.  The driver should have been near Smoothie holding her by a lead line.  If he had done the right thing, he might have prevented Smoothie’s death.

Horses can spook very unexpectedly and easily – but they often give you a clue - a little advance warning  that they are having an anxiety attack.      Smoothie spooked at something –  perhaps a loud noise -  and tore down the street, hitting a tree.  She died on the spot. Poor girl, she deserved much better.

A second horse – also unattended – was unnerved  by Smoothie, broke free and ran into traffic, crashing into a car.  The passengers were not injured but one of the women said that when she saw the horse coming at them, she was very frightened and thought it was over.

Smoothie was owned by Cornelius Byrne who was arrested just weeks  later and charged with bribery.  He received a slap on the wrist but eventually lost his license – apparently only for a short time since he is still in the business. 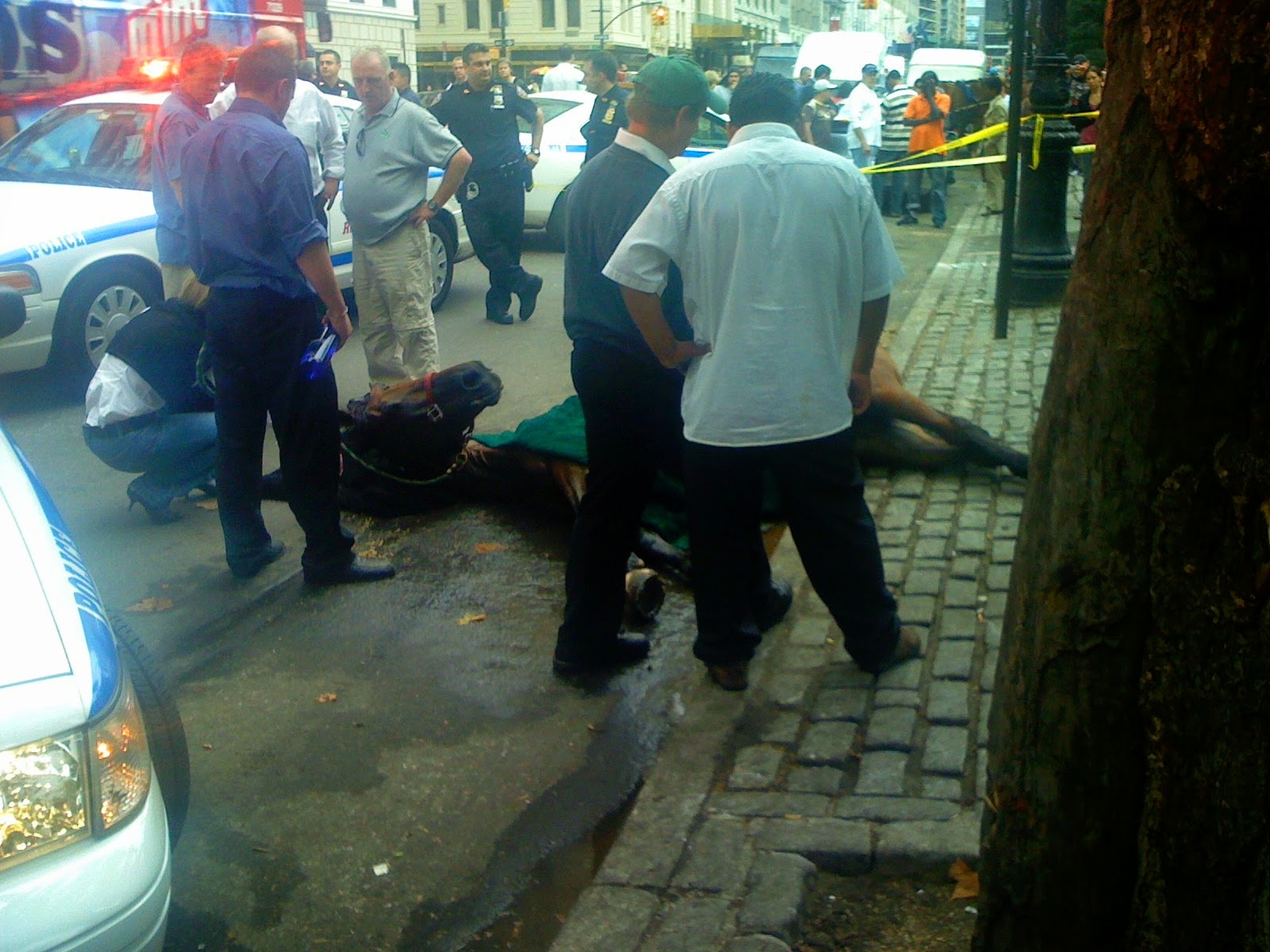 our argument that much stronger.  I saw this particular photo recently for the first time and I was very moved and saddened.  Other photos published at the time showed Smoothie dead on the ground.  But this is Smoothie with her head up, dying, and no one is comforting or petting her in her agony.  I cannot imagine loving an animal as the carriage industry claims to do and then to ignore the most basic expression of compassion.  Look at the body language of the men surrounding her – hands on the hips, looking at her with disdain – probably thinking about the financial loss.

This is a sampling of some letters published in the NY Post at the time.

Although it happened seven years ago, this is the type of accident that could happen tomorrow.  It is a horse’s nature to spook.  At 1,500 to 2,000 pounds, when they bolt, they become unwitting weapons and can kill themselves or innocent passersby.  They do not belong in the congestion of NYC.  Please read It's a Safety Issue.

Council Members who are are opposed to a ban are choosing a small group of people over the welfare of the public at large.

Posted by Elizabeth Forel at 8:13 PM

Smoothie saddens me. She died alone, but is with so many other tortured beings now in spirit. a horse is a cow is a dog is a cat is a pig is a chicken is a human. All deserve to live, love, be amongst their own kind. We humans are paying with horrific diseases in our own bodies. We innately know our part and inflict cancers upon ourselves. There is a better way.

ohh God! poor friend, I must have hurt a lot :(
stall überwachung