Fashion Week NYC: Some of us care - some of us could not care less.


Fashion Week in NYC.   Some of us care.
Some of us could not care less.
what went on behind the scenes...

Fashion designer Victor deSouza, in an obvious desperate attempt to get noticed, decided to use models and horse drawn carriages to show off his “designs” – scheduled for the evening of September 3rd.

Sponsored by NYClass, about 80 activists protested – representing many groups – the Coalition to Ban Horse-Drawn Carriages, Friends of Animals, PETA and the Animals' Battalion. 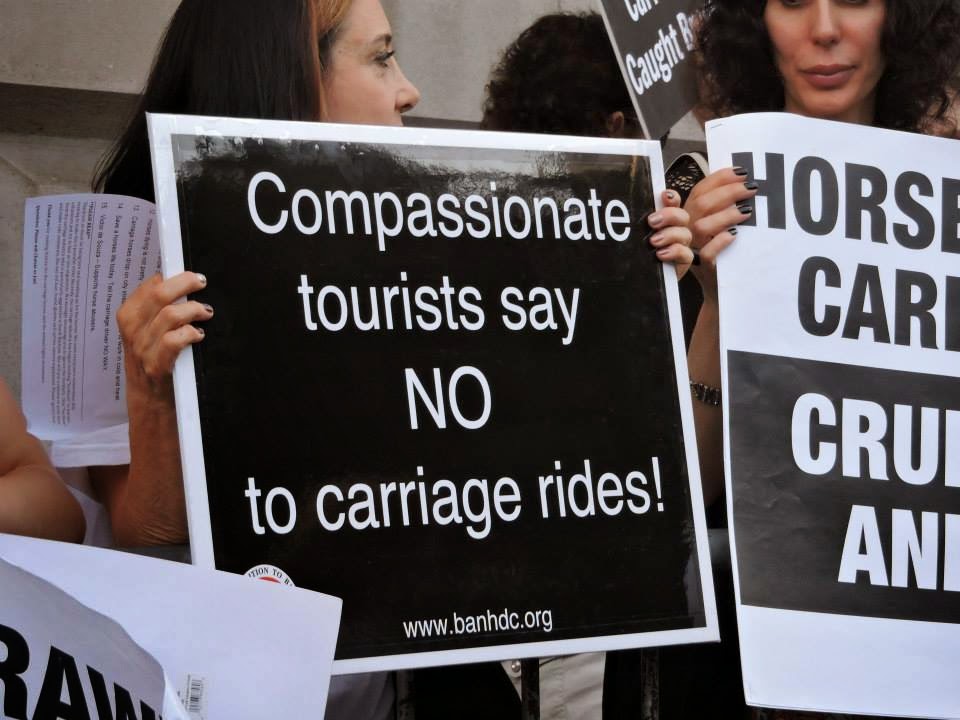 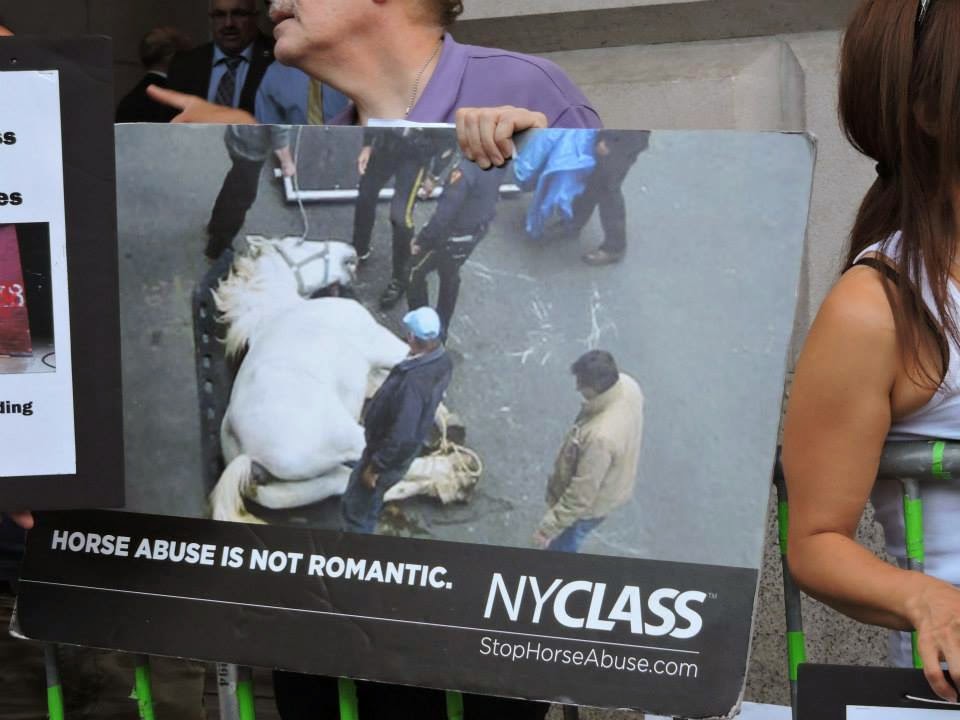 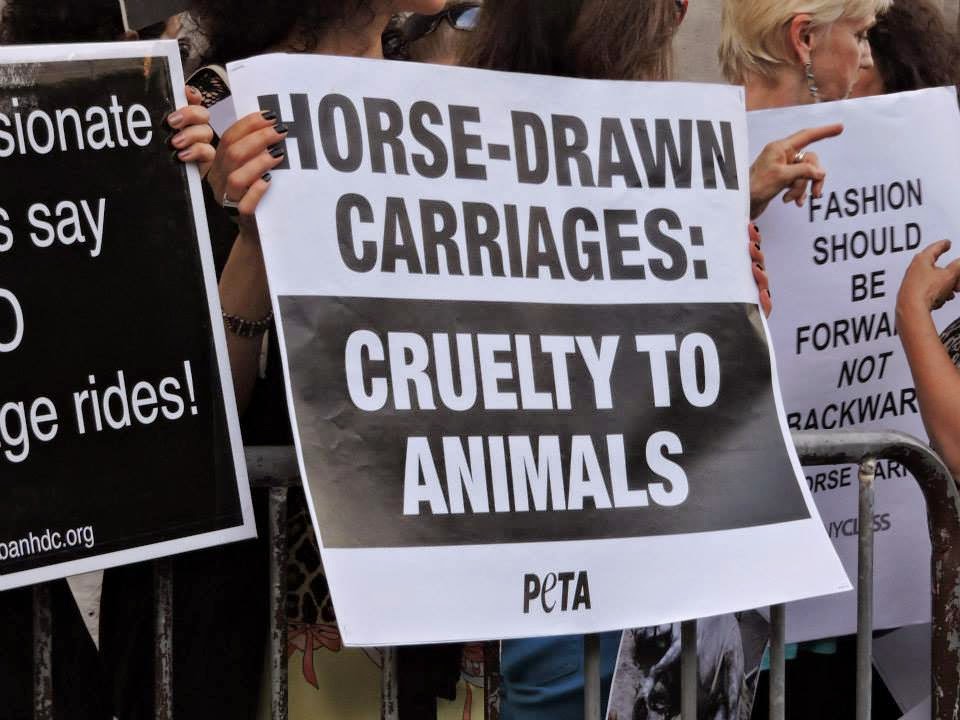 Meeting at 5:30 PM  in front of the NY Athletic Club on Central Park South, we were told by club employees that the event had been canceled because of the protests.

Never try to con an activist. 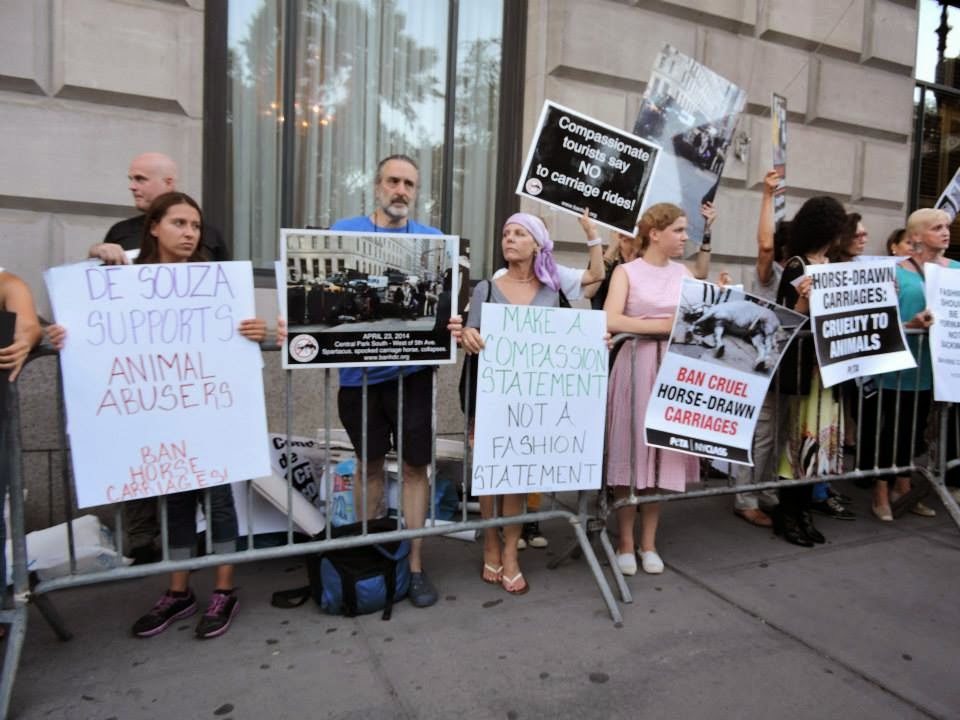 We thought they were trying to get us to go away and remained until just before 7 PM when activists went one block to Sixth Avenue where the carriages were converging to load up the models.

This blog by Donny Moss, is the best representation of what happened.  Activists and Fashion Models Clash in Mid Town


OK - enough with fashion.  I'd like to take a different approach – two things that happened last night that shed light on the kinds of people in and associated with the carriage trade -- those who exploit horses and do not recognize the wrong they do.
As the seven horse-drawn carriages waited within Central Park for the models to make their entrance,  Edita Birnkrant, head of the NYC office of Friends of Animals, reached over to pet the horse hooked to the carriage of a well known driver, whose wife is the VP of the Carriage Horse Association.   She noticed him shaking his head and wanted to soothe him

He said to her “Don't you dare touch my horse. That's my PROPERTY. Get your hands off my PROPERTY!”

"Property"  I say?  I thought this was a sentient being - a horse.  Yes I know that horses are legally property but we were not in a court room.  We were in Central Park.  And aren't these the same people who got the Daily News to report on how much they "love" their horses and that they are part of their family?  These horses are just like a TV or computer.  When they get old, they are discarded too.

This just shows what we knew all along.  They objectify their animals.  They are "property."  They can be sold  just like a car; they can sent to an auction and picked up  by a kill buyer with no tears lost because "it" is only property.

The second incident of note ...

One of our very favorite and most dependable activists is Natasha Brenner.  She, along with her late husband Noah, had been regulars on the activist front – coming to and actively supporting the ban carriage horse trade activism, the Defeat Christine Quinn campaign – among others.  Natasha will soon be 93 years old and is an inspiration.    Although she walks with a cane, she has more energy and spirit than many people half her age.  She is always willing to “go.”  She is simply one of the “guys.”
She was recently interviewed on TV during our Gracie Mansion demo. Click here.

We do not know the woman in red pictured below.  She is involved with the carriage trade and often shows up at City Hall with them.  Last night she looked at the crowd and saw Natasha and said “Look at her – who let her out of the nursing home?”  Someone told Natasha who wanted to know who said it.  She immediately went over to the woman and said “I’m not in a nursing home” to which the woman replied  “well you should be.”

Don’t think this cruel woman got away with saying that.  Several of us took her to task.

This is what these people are.  Soulless.  They cannot argue against a ban based on the merits unless they lie about the industry; what a horse needs; the number of accidents – and then call us names -- criticizing our looks, age, trying to expose any personal information they have on us - about our jobs, employers, loss of a pet.  They are cruel.  And they are the ones who have the horses.

It is childish, mean spirited and low class.  They have also shown themselves to be racists, anti women, anti gay and anti anything that is not them.

I expect that they will send me nasty, threatening,  vile anonymous messages because of this blog -- this is how they fight.  They tell lies while donning a mask  of anonymity.

Posted by Elizabeth Forel at 1:28 PM

Surely no one with half a brain has ever thought that the INDUSTRY, has the interest of the horses at heart. This is a money-making "cash cow" or should we say "cash horse", a big cash business, with little enforcement or oversight of any regulations and, esp. of the overworked "slaves" pulling stupid, lazy tourists around the city. They are crass, vulgar and indifferent to the well-being of the animals they claim to love. Anyone who truly cares about horses, should also be aware that the lives these unfortunate animals are forced to lead, are sad and miserable...when not downright cruel and abusive.

The carriage drivers would not bring their horses out knowing that there would be a protest, unless they took precautions. These horses were tranquilized, probably with Acepromazine. You can tell by the way they walked and looked. Just give them a bit to take off the edge, make them less nervous. The drivers also put cotton in their ears.

But they are property so the drivers can do what they want to with them.

These poor horses. I volunteer at a horse rescue ranch here in Idaho and I love seeing the horses run free up and down the hills. These poor horses are slaves and deserve to be free. Get electronic carts instead and let them retire to sanctuaries. Shame on you for doing this.

The lady in red is no spring chicken herself!