How Liam Neeson is playing  his most questionable role yet.

Liam Neeson – while he won’t be getting an academy award for this performance, he might be acknowledged for total fabrication, spin and fantasy.

I finally got around to viewing the recent documentary about NYC’s carriage horses.  It is narrated by smooth talking Liam Neeson with his charming Irish brogue.  Yes the man is easy to listen to and believe.

For those who do not know, Neeson is a big supporter of the carriage trade and is quite  willing to lie through this teeth to make his point.

The unfortunate thing here is that many people will believe these lies simply because they come from  Liam Neeson – a well known actor.  They will accept what he says as gospel, never

considering that it is a combination of lies and hyperbole.  How could anyone doubt this man – after all didn’t he play Oscar Schindler in Schindler’s List – a hero who helped rescue Jews during World War 11?  Doesn’t he now play action hero roles?  As for me and those of us who see his true colors – he is more like his character Ra's al Ghul from the Batman series – a bad guy leading a League of Assassins. 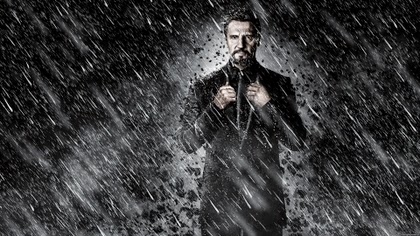 The video is more of the same – touting the so called 150 year “iconic” industry; since the time of Abraham Lincoln – conveniently forgetting that the current business started in the late 1940s – and that the horse was the only means of transportation before the 20th century.  He talks about how,  if Mayor deBlasio would just accept his invitation and visit the stables, he would be won over to the dark side and see that all was indeed OK with this inhumane and unsafe trade.

As if it were just about the stables; as if the stables – with small stalls located on upper floors accessed by a steep ramp and with no turnout to pasture – as if that were somehow OK for these horses.  We are supposed to believe that the drivers love their horses like their children – I wonder if they would work their children 9 hours a day, 7 days a week in all weather conditions.

Enough said.  After all – it is LIAM NEESON – so it must be true.

But it is all a bunch of lies if you know how to question and think analytically.

These are a few statements from the film and my rebuttal:

FILM:  The industry is overseen by 5 agencies and there are 144 pages of regulations.


TRUTH:  This, of course is not true since the ASPCA gave up humane law enforcement in January – so it is actually 4 agencies.  But it is all moot, since the industry is out of control and there is little enforcement of any of those regulations.  The fact that there are 144 pages of regulations is absurd.  Yes there might be -- I have never counted them.  But so what since many of the laws are not enforced – from the manure catchers being attached incorrectly causing abrasions on the horse – to horses being dangerously left untethered and unattended – to the many u-turns they make illegally; to overloading their carriages right in front of the police officers who do not know the regulations and apparently do not care.

FILM:   The horses can only work in “limited areas of the city.”

TRUTH:  Boo hoo.  Yes – and they are all heavy tourist areas where some of the drivers have been known to overcharge and collect a non required sales tax.  And of course, it is a cash only business, which is why they are fighting tooth and nail.    I say send them to the Bronx; make them report to the Taxi and Limousine Commission and account for every dollar they take in -- and you will see how they feel.  Besides, many drivers sneak down to Times Square before they are legally allowed.

FILM:   Neeson  brags that the horses get “5 weeks of country vacations”

TRUTH:  Enough of this ridiculous statement.  Horses need daily turn out to pasture, which they do not get in NYC – not a questionable trip to the “country.”  We have good sources that tell us many of the horses go to  Amish farms and are being worked in exchange for the driver fulfilling this “vacation” obligation.  But because the Department of Health decided  not to ask for a list of the “farms” or do inspections – anything goes.  It has also been  said that many of the horses look worse when they return from this so called vacation.  It is most likely because they were worked and not fed properly.    In a NY Post story  about a horse who dropped dead in October 2011, former ASPCA equine veterinarian Dr. Pam Corey said in the NY Post "We have observed some horses returning to New York City after furloughs on a farm in worse condition than when they left."  it is shameful that this was ignored by authorities.

FILM:  Neeson says the NYC carriage horses have a guaranteed retirement – but many horses are not so lucky
TRUTH:  This is an outright lie.  My records from the DoH – show that there was a turnover of 529 horses in a 7 ½ year period – about 70 horses or 1/3 yearly.   I found a former carriage horse, now named Bobby II Freedom, at the New Holland auctions  in 2010.  He was from West Side Livery.  He was going to the kill pen the next day.    Most recently, activists have been looking for Ceasar – a horse sold (laundered) to an Amish farmer, Norman Martin,  by driver Frank Luo.  Ceasar was old and sick.  It  is assumed he went to Canada to be slaughtered.

TRUTH:  No one knows how much the business brings into the tax coffers of NYC  but my estimate is less then $200,000 for the entire industry.    The income figure of $16-19M, which the drivers happily accept was contrived by NYClass' Steve Nislick to compare it to an estimated income from the electric cars.  It is totally made up and not accurate.  This is a cash only business.  My source tells me a medallion brings in about $130,000 yearly and that the owners report a fraction of that on their taxes.  This tax information is not public knowledge and the drivers enjoy making a fool out of all of us.

Thriving?  I don’t think so.  And if so, Mr. Neeson - prove it and show us the tax returns.  We have watched this business for years.  There are many times when the carriages  have no business – just stand there with their horses.  Someone should be looking into why they are fighting so hard to keep the status quo.  Is it because it is cash only – or are they laundering money for something illegal?  I have no proof, but it the shoe fits ...

FILM:  Steve Malone:  “at a low level, approximately 500 families are going to be affected.”

TRUTH:  Absurd!  Back when Malone was a bit more honest, he said between 130-150 people would be affected.  A recent list from the Department of Consumer Affairs of licensed owners shows only  220 licensed drivers.    At least three of them  should not have a license – one lives in Sicily; another has a carriage business in New Jersey and one lost his license a few years ago for bribing an investigator posing as an inspector.  There are probably others.

A recent article in the Queens Chronicle claimed thousands of people would be affected.  This number keeps growing and is delusional.  Does this mean that the person who sells carrots and the farmer who grows them will be affected?  And the place that supplies seeds to the farmer?

This is exaggeration and meant to persuade and guilt  the mayor into changing  his mind.

I would like to remind everyone that this is an entitled and infantilized industry – from getting reduced stable rents from the City for Shamrock Stables (now closed)   to low fees for licenses and low insurance requirements - much lower than pedicabs; not enforcing the laws – generally coddling them.  They want their way - just like children.

But what about many others who lose their jobs and  have to look for another or in many cases recreate themselves. Are they stamping their feet and making lying videos?

And frankly, we do not care if real estate developers are interested in the stables.  That land should be put to good use to benefit more people than just a handful as it does now.  The owners stand to make a lot of money by selling.  But they do not have to sell if they choose not to.  They could hold on to the property and rent it out.  No one is twisting their arm.  This is a bogus issue.

This stable on W. 37th St. is in the path of the Hudson Yards Redevelopment project, which has been under way for years.  The owner/carriage driver  could get at least $10,000,000.

and our Facebook page - No Walk in the Park

Posted by Elizabeth Forel at 10:13 AM

This industry makes me sick. It is so heartbreaking. Too many people refuse to believe these poor horses are experiencing abuse, neglect and downright torture.

Living in UK, it breaks my heart that this cruel trade carries on... hours of trudging on hard concrete in all weathers, kept in tiny barns, where is the compassion in the human race? When are you going to step and do what you promised D Blasio... turning out to be like all the rest, a liar who took all the support he could get and now is not living up to his promise to ban the cruel horse trade...

Don't these drivers work for all cash? How much is reported?

Ask NYC for any records of revenue. I guarantee there are very few.
Report them for evasion.

What makes this actor so informed and educated on the slave like conditions in this industry? Who is paying him. Just another actor self promoting his career.