Thank you for inviting me to be part of this very important event. 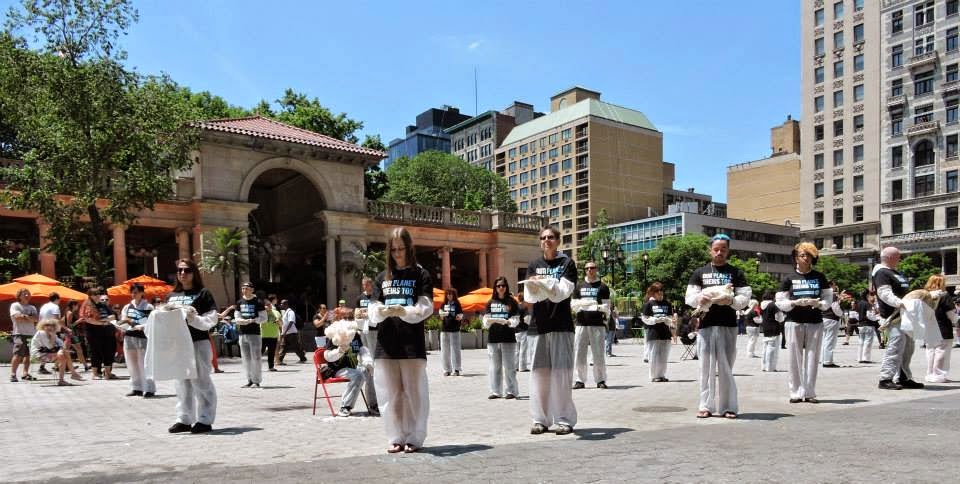 Today, I would like to address where we currently stand on the carriage horse issue in NYC; how we got there and why it is so important for our moral and ethical progress to shut down the carriage trade

CURRENT STATUS:
Here it is June - the sixth month into Mayor deBlasio’s administration and the carriage horses are still on the street and we are no closer to seeing an end to this inhumane and cruel business. The mayor made a campaign promise to ban the industry his first week in office, which we knew was unrealistic. But we remain in the dark about his plans.   We are the ones who put our souls into this and helped to put the mayor in office.   Yet we are expected to have blind faith.

At the same time, when the mayor has commented on this issue in the media, he has remained resolute about keeping his promise.  He does not appear to be backing down.  But how will it happen?  We believe the mayor will have to meet with the carriage owners and come to some kind of agreement about their new jobs – whatever they will be  - and what will happen to the horses.  But it remains a mystery.

HOW WE GOT TO WHERE WE ARE NOW
By not acting on this quickly, the administration has given the drivers time to develop their argument and to rally people to their side.

What has happened since the September primary is that the NY Daily News began a hatchet job on the mayor – ripping into him almost every day – publishing the most bizarre yellow journalism articles filled with lies and exaggerations.   Other editorial boards, including the NY Times, NY Post, AM-NY and TV stations like Fox News, NY1, and Pix 11 followed.  Many reporters have continued to promote the drivers’ lies as their opinions shift into supposedly fact driven articles.  The carriage trade hired the infamous anti-animal Cavalry Group to fight this battle for them.  This is the anti-animal lobby
group that supports puppy mills, horse slaughter and a weakening of animal cruelty laws around the country.  The Teamsters have also joined the fray, going against the first pro union mayor in decades – a very foolish action.

There’s been no fact checking, no investigative journalism and gratuitous dishonesty. 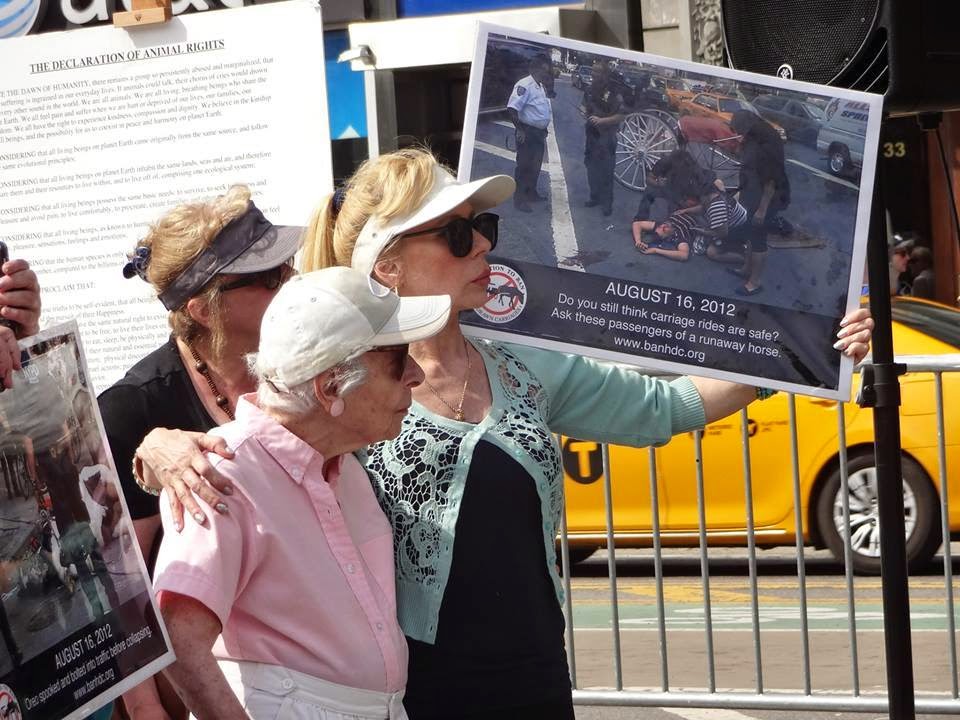 It seems like the inmates have taken over the asylum. Unfortunately, people will often believe what they hear on TV or read in the newspapers without questioning. This is why the media is so powerful.

Please do not think it is about the horses.  Mort Zuckerman, the owner of the Daily News and his editor, imported from a Rupert Murdock failed paper in England, want to see just how much power they can wield.    The Daily News does not care about the horses or the drivers.  Instead, they are being used as poster children - a metaphor for deBlasio’s progressive agenda.  If the right wing media can get deBlasio to cry uncle on this issue, this will open the door to other things.

So when you hear about the Quinnipiac poll showing 60% of respondents opposed to a ban – you must also realize that these polls were taken after an extended brainwashing period.  Polls like this are meaningless to critical thinkers.

THE LIES THEY WEAVE
But what is so disappointing and even appalling to me are the reasons provided by those who oppose a ban – and the lies they weave – it is all from a perspective of human selfishness and greed.  Only people matter.  Animals – in this case horses – are secondary.   When people make money off the backs of animals, how could it be 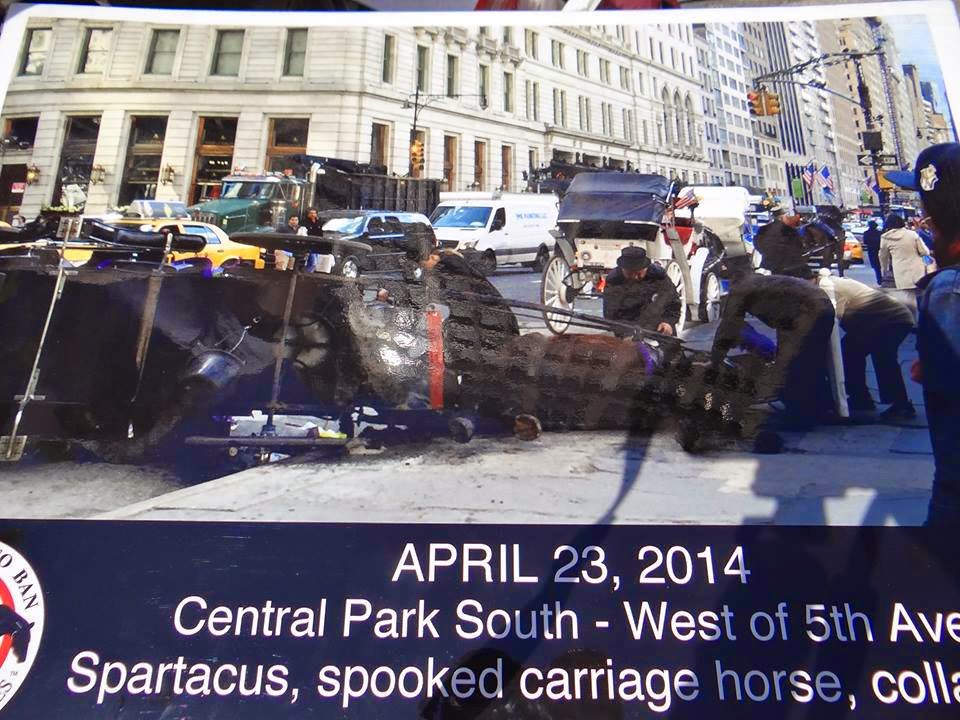 anything but a conflict of interest?  It’s money vs. true animal safety and welfare.

-         They talk about this “iconic” industry – overusing this word until it has no meaning.
-         Lie about it being a $15-19M industry. This number was contrived and estimated as a comparison to what the electric cars might bring in.  It has no basis in reality.  At an approximate 4% NYC income tax rate, this would mean the city gets about $760,000 yearly.  Highly doubtful.  We believe it is a fraction of this number – probably less than $150,000 overall.
-         The number of people who would lose their jobs keeps increasing depending on where the story is published   - I have seen it as high as 500 – but it is an exaggeration.   The head of the Carriage Horse Association admitted that it was 150-160 people.  Many of those who hold carriage licenses are either part time no longer use it or live in another state or country.
-         Many people have lost their jobs in NYC and have been ignored by the City Council and the Daily News.  They have had to find work on their own.  Why are 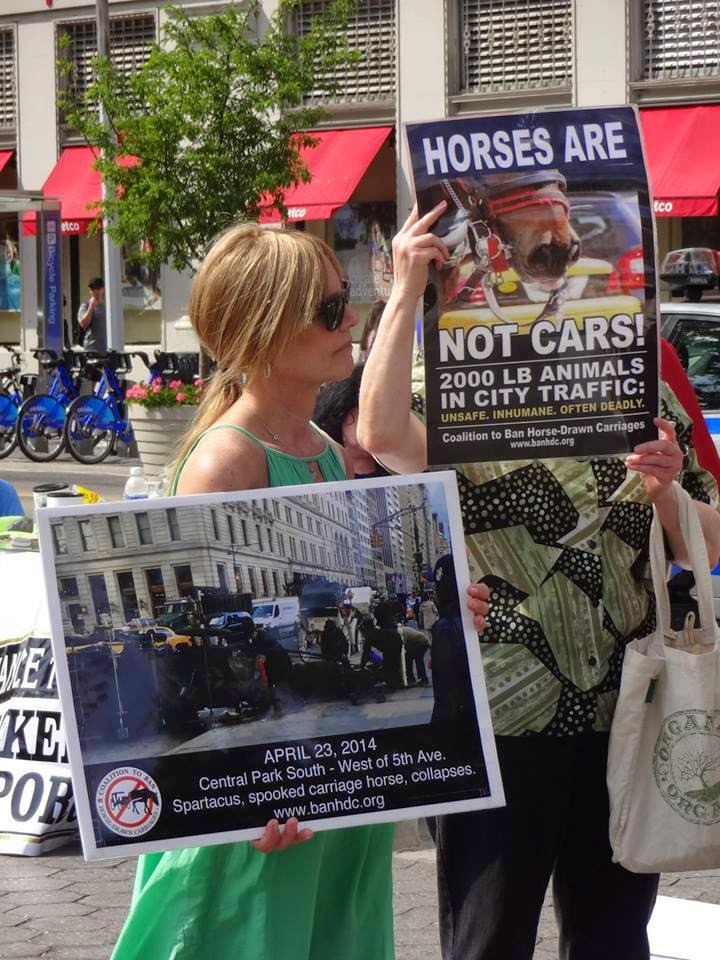 the carriage drivers so special – what power do they hold over the Council?

-         Unions – their jobs have been referred to as “good union jobs.” – but it is a fake union – it is not a “union shop” meaning it is not mandatory to join the union and the drivers and owners belong to the same local; there are no benefits.  Real union members should not be happy about the Teamsters pressuring deBlasio  - the first pro union mayor
-         Even so called progressives like Norman Siegel and Ron Kuby have shamefully joined forces with the drivers and the right wing Cavalry Group and are spewing lies.  To Ron Kuby – I say – you are no William Kunstler – his former partner, who died several years ago but at the end of his life had discovered animal rights.  Such a disappointment – I ask, are they so desperate for new clients that they would sell their souls?
-         Some right wing tricks of media manipulation are character assassination as when they call us extremists or radicals; or fear mongering –  a proven tactic of media brain washing.  In October 2013, the Daily News ran a story about how the carriage horses were all going to slaughter if there were a ban.  It is not true, we have provided proof that it is not, but people still believe it. 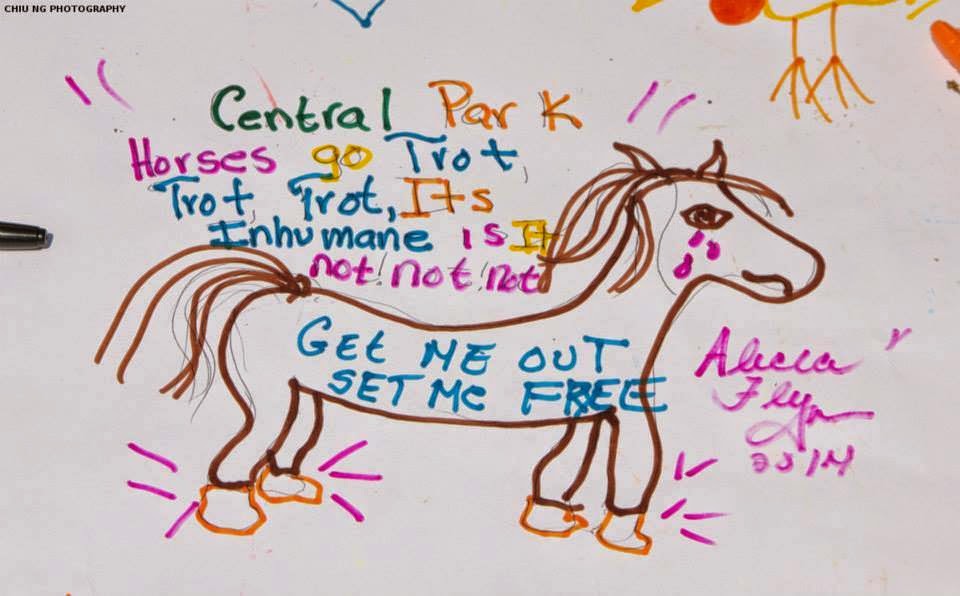 If you repeat a lie often enough, it becomes the truth - This is often attributed to the Nazi propagandist Joseph Goebbels but it has a lot of truth.   This is what is happening with this issue in NYC.  Our side – the side of compassion, selflessness and truth is not being given an opportunity to speak out.
The other side will use names like The Alliance for Truth Campaign – or Carriage Horse Facts – promoting that only they are telling the real story.  They continue to call us liars about anything and everything or that we know nothing about horses.  This is a right wing trick.

They say the horses live a pampered existence; that they have a rigorous licensing process; with equestrian experts; an industry that is overseen by 5 city agencies; stables are lavish; and that the horses have a standard of living that “out performs most human residents of NYC.”  This is from the Cavalry Group and the Daily News and people believe it.

When the law passed in 2010 requiring that the horses get 5-weeks’ vacation each year, 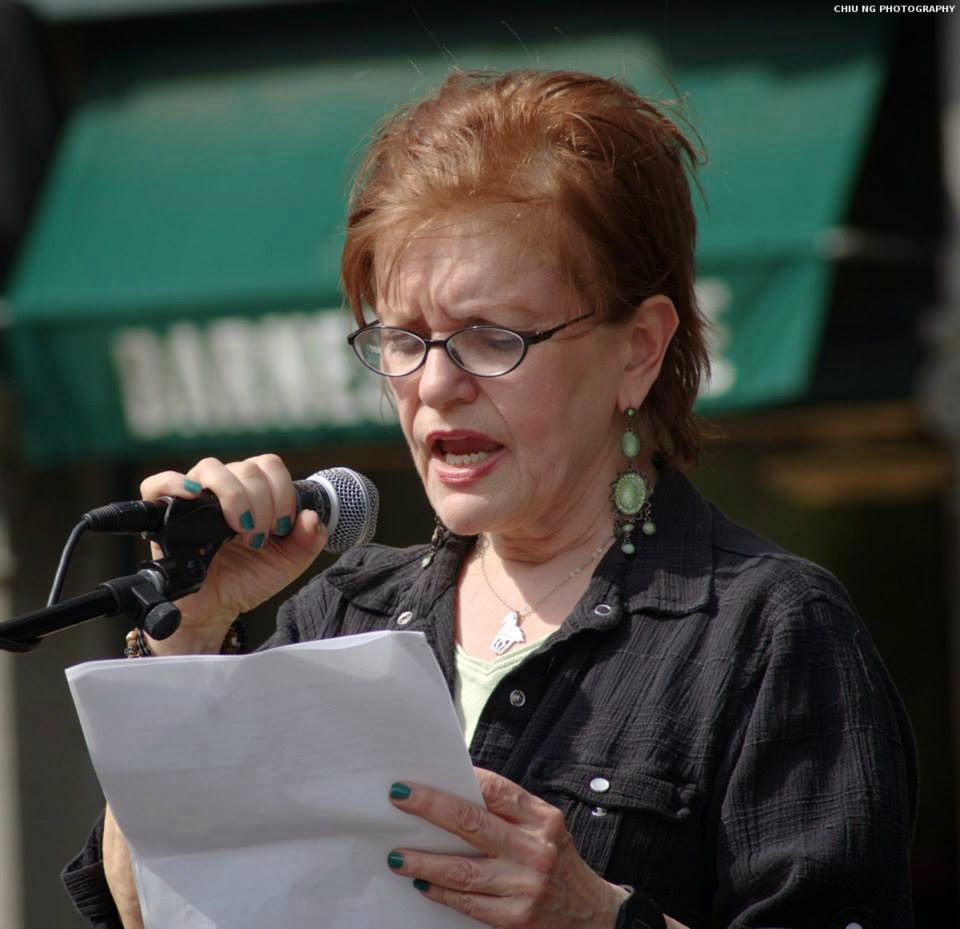 the media went wild with this concept – calling it a luxury, comparing it to people who did not get any vacation.  This lie has been perpetuated and many people have fallen for it.  But vacations are a human concept - horses need daily turn out to pasture, which is not available in New York.  Besides, the City of NY enables the industry by not requiring inspections or even the names of the so called farms where the horses go.  We have heard from several different sources that some of those horses are provided to the Amish to work their farms in exchange for being able to say the horse went on a “vacation.”

WHO IS OPPPOSED TO A BAN
-          People who think it is OK for the horses to be pulling carriages are generally those who believe that only people matter.  Animals are here to be used, to be exploited   - whether it is to be worked in the field; to run races for human ego and greed   or something silly and frivolous such as the carriage trade.  They are legally property and are treated as such.  When carriage horses are no longer up to the job, they are disposed of.  Although legal, the owners know it is frowned upon to admit they bring them to the slaughter auctions, so they will launder them through Amish and 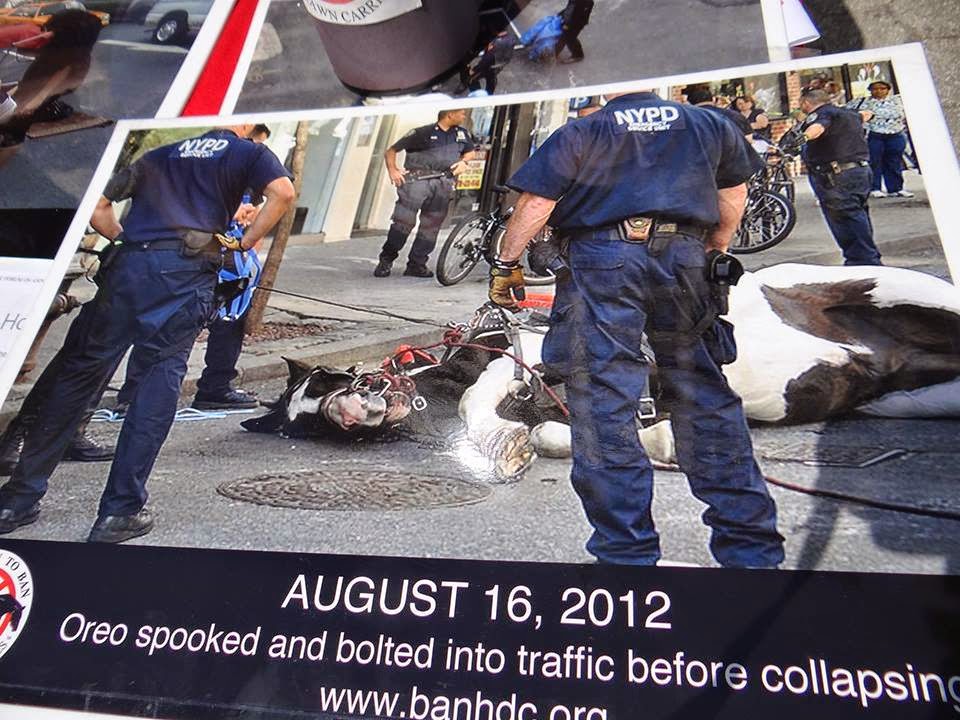 Mennonite farmers – often times sanding off their 4-digit hoof number so the horses are not identifiable as NYC carriage horses.

-         The City of NY also enables the industry by not requiring sales records when the horse is sold outside of the city as most are.
-         Others who oppose a ban are afraid and believe their life style is being threatened.  We represent a slippery slope and any area of animal exploitation is fair fame.

PEOPLE WHO CARE ABOUT AND RESPECT ANIMALS GET THIS ISSUE RIGHT AWAY.
-         The horse is a prey animal meaning that he is a nervous being and can spook from any number of threatening stimuli – rustling leaves or plastic bags, loud noises, umbrellas opening.  At 1500 to 2000 pounds, he or she should not be on the street dragging tourists around.  If spooked, the horse will bolt into traffic to get away from the source of danger.  He becomes an unwitting weapon and can kill or injure himself or innocent passersby. NYC has been the site of many accidents.
-         It is foolhardy for the City Council to put the safety of New Yorkers at risk for this business.
-         The horse wears blinders and check reins, and works between the shafts of his carriage for 9 hours straight – not even able to scratch an itch.  If this business were so safe then the horse should not be forced to wear blinders.
-         He is forced to work on hard pavement, which causes concussive injuries
-         He often has harness rubs from ill-fitting tack
-         At the multi storied stable – he reaches his stall, which is less than half the size experts recommend, by way of a steep ramp
-         He has no access to pasture – nothing.
-         He works in one of the most traffic congested cities in the world; led by drivers who often do not pay attention to the road as they use their phone or read.
-         When he is tired and just does not cut it anymore, he is disposed of.  There is a turnover of 71 horses a year in this business.  We believe many are laundered through the Amish farmers on their way to the kill auctions.
-

This business must stop this year – completely.

Many organizations have committed to finding homes for the horses if the drivers agree.  But the ban has to happen.  Our patience is growing thin.  New York City must not continue to be known for this cruelty.  We must be a leader in doing what is right for the horses and for the many people who care about them.

This industry is a ticking time bomb – always an accident waiting to happen – injured or dead people and horses.  Mayor deBlasio promised and we want him to keep his word. 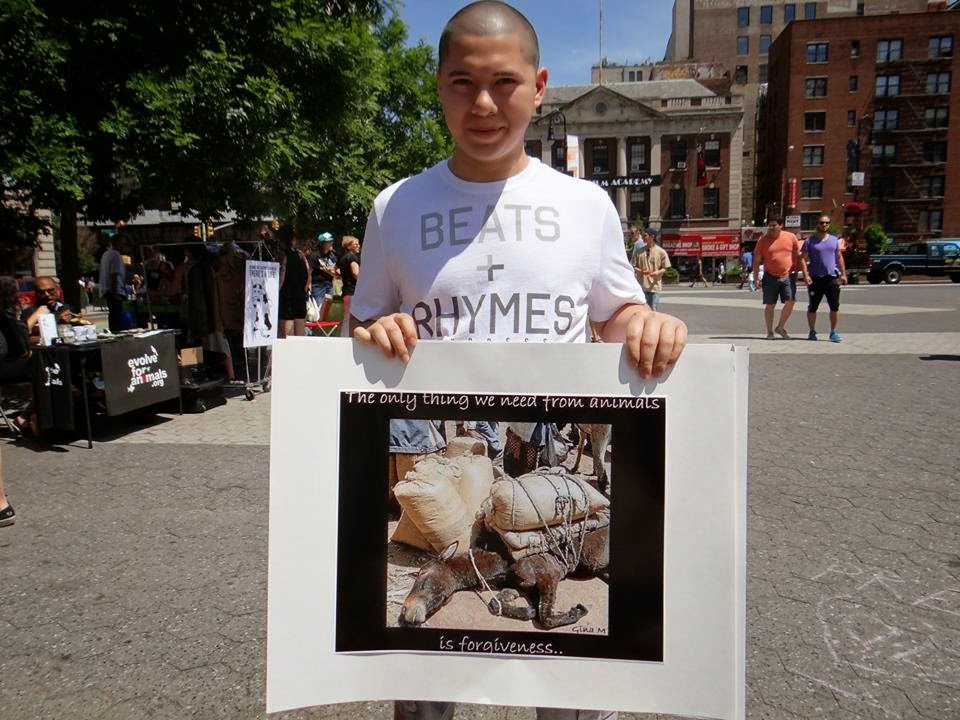 Posted by Elizabeth Forel at 9:14 PM