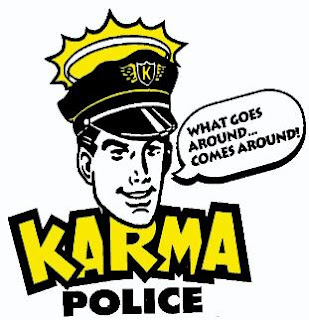 Hey all. Ollie here. I’ve been thinking a lot about Karma after looking at a video of the recent City Council hearings on several bills that would affect the carriage industry.

Karma – or “what goes around comes around” is an interesting concept. In Eastern religions, the effects of all deeds are viewed as actively shaping past, present and future experiences.

The NYC carriage drivers are very upset that there has been a movement to ban their industry and have engaged the services of the Teamsters Union to influence the City Council. They do not actually have a "union shop" since it includes owners and drivers and only about 1/3 of the people in their business. It is more for the appearance and to put pressure on the City Council.They admitted they did it because they were "under attack" by the groups that wanted a ban of their industry.

The owners cry about losing jobs and not having a raise in over 20 years – how everyone is picking on them. They are the good guys and everyone else is bad.

But hold on here. Let's get the facts. Let's review recent history. How does Karma have anything to do with the carriage industry and what is happening now?

In the fall of 2005, Tom McMahon, carriage horse lobbyist

-- and husband of Linda Gibbs, Deputy Mayor of Health and Human Services,

-- which oversees the Department of Heath and Mental Hygiene,

-- which in turn oversees the carriage horse industry, (that sure sounds cozy)

put through a bill in the City Council that would BAN THE PEDICAB INDUSTRY. Yes, you heard right.

They wanted to kill off the pesky but burgeoning pedicab industry because they were stealing their territory and customers. It did not matter to them that many people would lose their jobs as long as it was not them. Fortunately, the bill did not go anywhere when Council members began to remove their names.

So now the shoe is on the other foot; the chickens have come home to roost and what goes around comes around. Yes, you do reap what you sow and you also get a taste of your own medicine.

But the carriage industry is lucky in a sense. A new business has been offered to them on a silver platter for the taking ... classic replica hybrid touring cars ... being proposed to phase out the horse-drawn carriages. The driver/owners are very opposed to it.

Since the industry has probably seen its hay day and will begin to unravel in a few years with the development of the far west side (Hudson yards project) – it is curious that these owners are so opposed to this offer, depriving their own workers an opportunity to make a better living. The jobs will be union, pay more and offer benefits. They say that it does not exist elsewhere; that the person behind the proposal is out to get their land; that they are horse people and will never give up. "Bring it on" they say.

This is all very unfortunate and just confirms that the thinking behind this industry is not very innovative or creative. Maybe the "exact" business does not exist elsewhere, but similar ones do. Besides, why can't NYC be number one? Rome is also considering vintage cars to replace the horses and their proposals are independent of the NYC's.

But money talks and maybe the pot is just not sweet enough. Maybe the owners want a financial interest in this new business to make it worth their while. Maybe the negotiations need to continue because this issue is not going away ... even if the City Council is dumb enough to pass Intro 35.