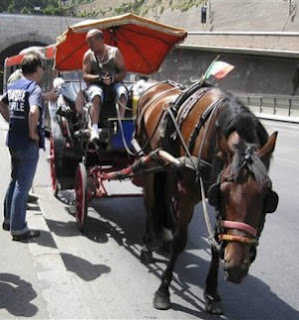 You gotta love those Italians – they really know how to make things happen!

It was only a week or so ago, when we heard about the Italian animal rights group in Rome – ENPA - calling for a ban of the horse-drawn carriage industry. Activists took to the street giving out fliers to tourists asking them not to take the carriage rides.

Not wasting any time, the Italian parliament has taken up this cause. Our NYC Council, most of whom have no backbone and do whatever Speaker Christine Quinn dictates, are only good at naming streets, giving themselves raises, getting slush fund money for their favorite groups, and collecting a pay check. Pathetic! Quinn has a tight bond with the Queens Democratic party, which got her into power. It is this party that supports the tiny, tiny carriage industry. They can do no wrong Enough said.

The carriage industry in Rome is accused of routinely fleecing customers; illegally working during the hottest period – 1-5 Pm from July to September and generally treating their horses cruelly. Sounds familiar.

Gianni Mancuso, a deputy for the ruling People of Liberty alliance and a veterinary surgeon, demanded to know what the government “intends to do about this scandal.” He claimed that the drivers worked the horses “to death” sending them to slaughter when they were no longer able to work.

ENPA has appealed to the Mayor of Rome, Gianni Alemanno, to ban the industry and transform their licenses into taxi licenses.

This is the same issue in every city – especially the large ones – that have a horse carriage trade -- New York, Boston, Chicago, Florence, Philadelphia. Horses are exploited to entertain people. They are literally worked to death – wearing heavy tack, blinders, bits and stuck between the shafts of their carriages for hours on end.

We will be following the situation in Rome closely.
Posted by Elizabeth Forel at 4:52 PM

Thanks for this update on situation with carriage horses in Rome, and their brethren in New York. Funny, isn't it, that although Italy isn't known for its stability in the political and government arenas, an issue like this can at least get someone's attention. In New York, the greedy and corrupt politicians are purely worthless. What is that they DO, anyway? Thank God for term limits. Most of these creepy politicians will go, and not a minute too soon. Constituents, meanwhile, have bombarded the City Council and the Speaker with petitions and letters to rid the city of the carriage horse industry. To no avail, as your piece correctly pointed out. It's disgusting.

this poor horse in Italy, severely undernourished, exhausted and most likely thirsty looks like the NYC horses do after long, way too hot day. I don't understand why other council members kow tow to Quinn, there is much that we don't know behind this curtain of corruption, what other politician would have their peers standing beside them even after their corrupt behavior is exposed? Something really stinks in the City Council, this calls for a Federal investigation!

Do you know the e mail addresses of the responsible authorities in New York mentioned in the two previous comments? I would join an e mail protest if I could. Cheers