are the carriage drivers using subtle ethnic slurs and
stereotypes  to gain support?


The carriage drivers lie  ... a lot.  They make things up as they go along to fit the circumstances.  They stay up late at night thinking of new whoppers.  I wrote a blog about this called Lies and Desperation - the NYC Carriage Trade.

But the BIG LIE that has been spread unchallenged in the media is this:  The real reason there is a campaign to shut down the horse-drawn carriage trade is because a certain real estate developer wants the stable land.   The media has been very sloppy in not doing their own research, taking these accusations as gospel and running with them.   They like this story and seem only too happy to perpetuate this fairy tale.


This  real estate myth is not true and is a diversion made up by the carriage drivers to build sympathy for their cause so people would not look into their shoddy abusive business.

Everyone loves to hate real estate developers – right?  They are greedy, perceived to have too much money; put up buildings that are too big,  and ruin neighborhoods.  They are the perfect villains.  And many also happen to be Jewish.

Some of the language being used by the carriage drivers and their cronies is Code for discriminatory Anti-Semitic slurs.  They get to express their intolerant views about Jews without being accused of antisemitism.   And they get commiseration from the gullible public.

I am shocked that the media has allowed this disgrace to continue and that more Jews have not recognized this for exactly what it is and stood up to be counted.  Every fair-minded and socially conscious person should condemn these actions.   But I get it that people often do not like to acknowledge that prejudice and discrimination exist.

What better fairy tale to create than to blame the campaign for a ban of horse-drawn carriages on a wealthy real estate developer … a bad guy.  A Goliath compared to a David – the “poor working-class drivers.”  The fact that he happens to be Jewish is just icing on the cake for them.  And the fact that many of them are hardly poor working-class is beside their point.

As if  … our interest in shutting down this inhumane and unsafe trade could ever have anything
to do with the fact that we are tired of all the horse spooking accidents, horse deaths, inhumane 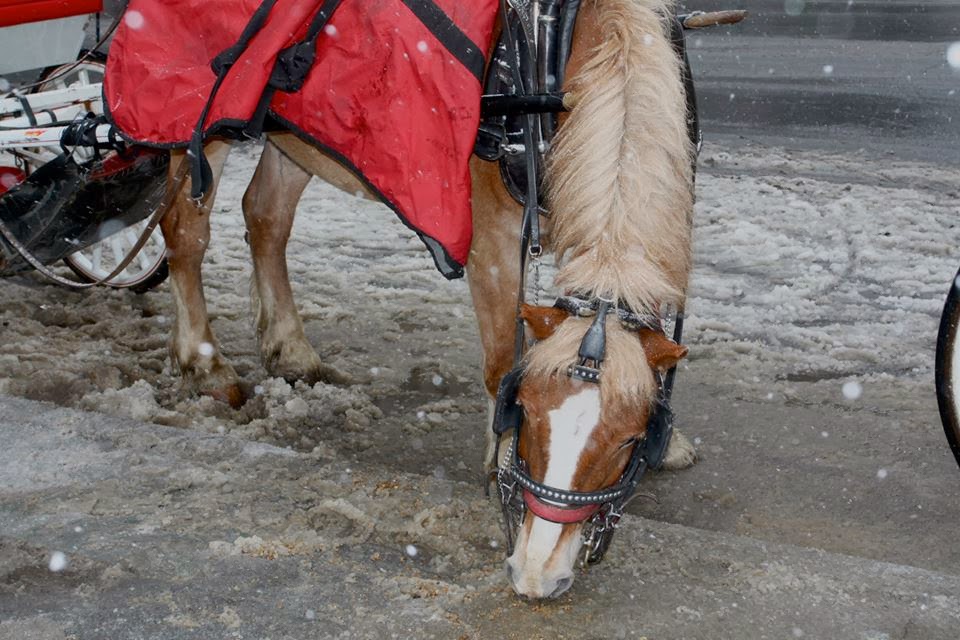 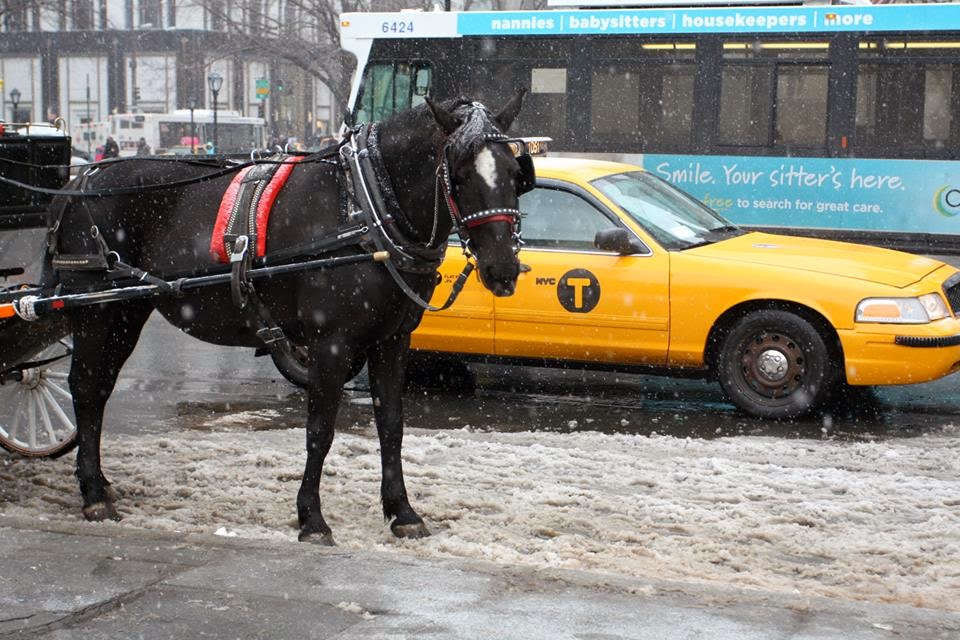 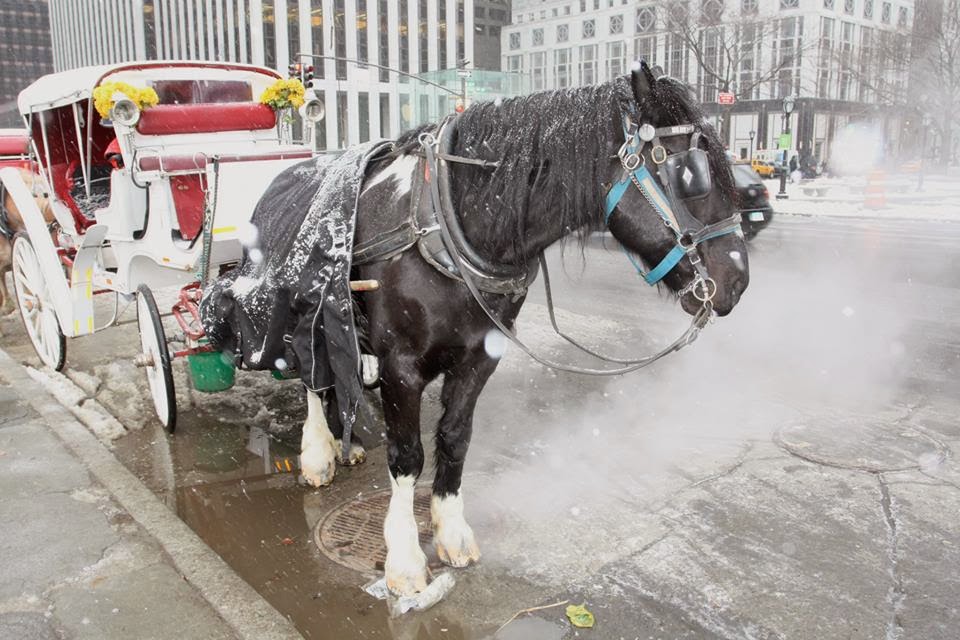 living and working conditions; drivers constantly flouting the law in a business that has little actual oversight; horses going to auction and then on to slaughter in Canada and Mexico; horses slaving  for 9 hours a day 7 days a week and then going on 5-week furloughs only to return looking worse.  And we are tired of the City being held hostage by this tiny well-connected group of people.  What about all the others who have lost jobs over the years?    Who is crying for them?  What about all the obsolete businesses that were forced to close because they lost any real viability?

Nah – could not be that.  Must be because of this all powerful real estate developer, Steve Nislick, who apparently has Mayor deBlasio wrapped around his little finger.  But he did not donate any more to deBlasio than the legal amount allowed.  Many people did that.

These are some of the comments below that have been published for some time now in the media.  Because they were not challenged, they have gotten legs of their own. People want to believe in the bogeyman – the Goliath (Jewish) real estate developer.  But really -   why would anyone in his right mind lust after this stable property for five years – property that is not contiguous – on rather small lots.  If Nislick were interested in this area, he could have purchased other property that was available.  The owners would not have to sell it to him.  It does not make sense.

The development of this area, which is called Hudson Yards,  has actually been going on for more than ten years.  The area extends from W. 28th St. on the south to W.43rd St. on the north and from Seventh and Eighth Avenues on the east to the Hudson River.    It  includes the land on which the stables on 37th and 38th St  are built  – but not the ones north of that.  So eventually these stable owners will be forced out of their businesses to make way for development that is good for the City as a whole.

Although I believe Nislick should have spoken out much sooner, he recently did and his comments are on their web site.
”I’ve never been interested in these properties and do not want them now. These are private stables, under private ownership by entities who can keep them or sell them as they see fit.  But I will not bid on any property if it is put up for sale, nor will anyone else in our organization. Our sole interest is in the health and safety of the horses.”

These are some excerpts from articles in the media:

Lee Siegel in NY Magazine
And where does one put in the political landscape, the carriage industry’s accusation that the animal-rights people are using the issue to hand the Hudson Yards stables to real –estate developers (who could surely find the money to buy them honestly)?
When talking to the well-educated, often Jewish liberals who make up the animal-rights movement in New York, and to the Irish-American hard cases like Byrne-28 years driving a carriage so that he could afford to raise his daughters in Caldwell, New Jersey, and send them to Montclair Kimberly Academy – you can feel that you are I a Sidney Lumet film.

USA Today
The drivers contend that NY Class is a cover for developers who have their eye on the property that stables take up along the City’s West Side.

NY Daily News via Liam Neeson
“Neeson also speculated that real estate developers are pushing the ban to snatch up valuable real estate currently occupied by stables, currently located on Manhattan's far west side.”
“History teaches us that land grabs can manifest themselves in various ways. We all know the land on which these four stables sit is most valuable. Please do not become complicit in this type of practice,” Neeson wrote.”

And from that strangely right wing Front Page :
“The man behind the Anti-Horse Jihad is Steve Nislick, a real-estate tycoon with an eye on their stables, , and a hand in Bill de Blasio’s greasy pocket.”

Mike Vogel from AM-NY
“But carriage-horse owners say that what's really behind the push to get rid of the Central Park carriage horses are developers who are perhaps looking to turn the stable properties into condos. According to Crain's New York, Steve Nislick, developer and founder of anti-carriage-horse group New Yorkers for Clean, Livable and Safe Streets, is a big de Blasio contributor.

Emily Hager – NY Times
Besides the animal rights campaigners, the industry is facing a classic New York peril: rising real estate values. Developers covet the stables on the Far West Side where the horses have long been kept.

Gothamist – comments by driver
… got a group of people who are being fed nonsense. The guy who's funding all this is a real estate guy. His name is [Steve Nislick, co-founder an president of NYCLASS]. He's interested in buying the land. The stables are located right by the Javits Center and they want to put hotels up in there.

Change.org petition to the City Council
please do not bow to the new mayor's pressure and ban the beloved iconic New York City Central Park horse carriages. Our mayor has said his first priority is to pay back his campaign's billionaire real estate donor Steve Nilsick (the man behind NYCLASS & their well-funded push for the ban) with the valuable Westside stables properties. This is completely unacceptable & a great disappointment. All oversight agencies have no evidence of abuse. These are union jobs that would be destroyed and these horses would be sent to slaughter. They are some of the most well-cared for horses in the world & the only chance for many nyc children get to see these special creatures so please stop the mayor from taking them away.

The drivers are always looking to divert people’s attention away from the inhumane and unsafe conditions in the carriage business to something else -- be it police horses, horse racing, dressage -- but none of these hoped for diversions took hold.   With their contrived Irish brogues, they were quick to say that we are anti-Irish.  Wrong again.    We not only work with two Irish animal rights groups in Dublin, but we also have Irish Immigrants and Irish-American activists working in our campaign – along with people representing a diverse group of ethnic, racial, secular and religious backgrounds.  I am first generation Irish on my mother’s side – more Irish than many of the drivers.  So that charge simply did not work.  Besides the “greedy real estate developer” story was much better.

So I hope you get the picture.  This is not so surprising when one considers what happened in July 2012 when a driver went off on a group of demonstrators.  Then it was much more blatant.  He was heard making anti-gay, anti-black and anti-women comments, which were taped.

We are not on the same page as NY Class.  We  - Coalition to Ban Horse-Drawn Carriages - are a grass roots animal advocacy organization that started the ban campaign in 2006.  We have contributed much substance to this campaign in the way of research, reports and articles.  We do not support the electric cars as an alternative industry because they are too risky, expensive and do not exist.  The logistics behind setting them up in a phase out is so badly conceived that they are not only guaranteed to fail, they would guarantee that there will be no ban.

I have always said that a ban of the horse-drawn carriage trade should not be dependent on the success of an untried and risky business such as this.    This is not what any of us heard when we voted for Mayor deBlasio who clearly said it would happen soon.   We hope he keeps his promise and does not get caught up in this electric car nonsense.

The business needs to be shut down with no strings attached.

If jobs are an important issue to this campaign then the best thing is the retrofitted horse-carriage – sans horse.  It is a fraction of the cost of the electric cars and is available.  And the changeover could happen in a short period of time.  The work to convert the carriages  could be done local.

Please everyone – let’s have some honesty with this issue.  Stop taking the word of the drivers as gospel.  It does not reflect well on any reporter who puts their name to these stories.
The mayoral administration must be strong enough to say ENOUGH IS ENOUGH!   They need to say that this  business will be shut down and the drivers either take this job offer – retrofitted  carriages – or find something else ... that we will no longer be manipulated by this entitled business that has gotten perks for years.

These are two links to the Hudson Yards project.  It is huge project; it is the future and it is happening - and the horse carriage ban has nothing to do with it.

Posted by Elizabeth Forel at 7:22 PM

Thanks for sharing such an excellent post. it is very informative. keep posting like this.
Check my favorite collections Property in Hyderabad