WILL HORSE-DRAWN CARRIAGES REALLY BE BANNED IN NYC?

Ban or Not? The NYC carriage drivers believe and hope that there will not be a ban of their inhumane and unsafe horse-drawn carriage business that has clogged up the streets of midtown NYC for years; caused numerous accidents involving human and horse injuries; horse deaths and property damage – besides rattling the nerves of bystanders who quickly moved aside when spooked horses ran up on the sidewalks.    They have dodged the bullet many times, avoiding human deaths.  But human deaths involving horse-drawn carriages have happened elsewhere and it is only a matter of time before it happens here if this dangerous business is allowed to continue.

It has always been incumbent upon the Administration to address human safety issues.  But past administrations did not want to rock the boat and looked the other way.

Lies, Corruption  and Entitlements:  The drivers continue to put out misinformation about the number of horse deaths, accidents, how long they have been in business;  how simply wonderful their business is and how the horses are delighted to be slaves.   And the media eats it up.  After all, why shouldn't they believe they would win?  They have a history of enjoying an entitled business with perks that included very low rent on city owned stables; renovation of that same stable paid for with tax dollars; a Council Speaker who is cousin to a horse-carriage owner – and who used his influence accordingly; a Deputy Mayor married to a horse-carriage trade lobbyist – and that is just the main points of what we know.

So let’s stop the corruption and start with a fresh slate.  The majority of people want to see this business shut down.  Every online poll taken since 2006 has resulted in between 75 and 80% of respondents favoring a ban.  In Bill deBlasio, we elected a true progressive who won by 73% - a landslide.  This is  someone who included a humane city for NYC animals in his platform.  That has never happened before.

Vintage Electric Cars are a Myth:  Mayor-Elect deBlasio has promised that he would shut down the carriage trade almost immediately and we hope he keeps his word.   It will be logistically challenging.  I have communicated this to him in person and in writing why a ban of this business must not be dependent on the success of another privately owned risky vanity business – the phantom so called "vintage electric cars."   One really has nothing to do with the other.  He appeared  to understand  yet continues to talk about the non-existent vintage electric cars --  on his  web site and during a televised debate.  This is very troublesome.  These cars have been promised for five years and have never materialized.

If deBlasio makes one dependent on the other, there will be no ban.

And even if somehow the cars existed, a phase-out would be the worst thing to do.  The ill conceived plan was to retire 1/3 of the horse-drawn carriages or medallions  - 23 the first year and roll out 23 cars -- continuing over three years.  This means that  the industry would still have a foothold to cause trouble such as filing lawsuits.    What happens if tourists (possibly set ups ) still choose the horse- carriages?

The smartest thing to do is to shut them down at one time – phasing them out over six months to give time to place the horses.

But three years is a guarantee a ban will not happen and this is not what any of us signed up for. 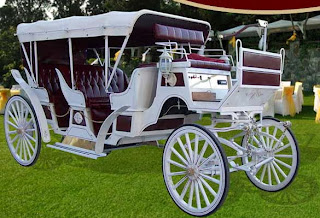 Jobs?  If Mayor-Elect deBlasio is concerned about the jobs issue, the best solution is the retrofitted battery operated horse carriages such as those already produced by Andres Carriage Tours.  The cost of this process is $15,000 to $20,000 per carriage.  Every carriage and medallion would remain – including the same horse-drawn carriage business model.  This should appeal to the owners who would continue to be autonomous.  But they have not accepted this idea either.  Since the horses are privately owned and the City cannot compel the owners to hand them off to anyone, perhaps money could be made available to retrofit the carriages in exchange for the horses.

The electric cars will not be allowed in Central Park because they are motorized vehicles.  Runners, bikers and others who use the park roads do not want cars going through the park and should rightfully put up a fuss if they were allowed.    So why would someone pay $50 to $100 to ride in one and sit in a traffic jam on Central Park South  just like any other frustrated person in a private car or taxi?

Am I missing something here?  In so many ways, this is a ludicrous not well thought out idea.

It  is also true that the retrofitted carriages may not be allowed  to go into Central Park either because they will be motorized.  But I believe an exception is much more likely for them than the cars because of the way they look.

NYC:  Stop being held hostage!  All that said –  is the City once again getting caught up with allowing the carriage trade to hold them hostage?    The driver/owners have known for years that their days were numbered – the  Hudson Yards Redevelopment Project covers the stables on W. 37th and W. 38th St., which means they would be demolished at some point.  Their business has fallen off over the years due to the popularity of the pedicabs; increased rates -- $50 for only 20 minutes; and the ground swell of popular opinion against them.

All of us know people who have lost jobs – whether they worked for retail establishments that were shut down because of redevelopment and gentrification of neighborhoods; government workers; or private industry.  Has the City stepped up and created jobs for all of those people?

Not that I recall.

No it is not pleasant to have to change your line of work and recreate yourself – but many people have been forced to do just that with no help from the City of NY.  So why are these people different?  Why are they so special.  Answer is they are not.

The Coalition to Ban Horse-Drawn Carriages  - www.banhdc.org -  started this campaign in January 2006.  Unlike the others, we are not in this to make money off the backs of horses  or off  a vanity industry.  We just want to remove the horses from harm's way - the streets of NYC - and see that they get good homes.

We hope Mayor-Elect deBlasio does the right thing about the horses and shuts the business down soon as he promised.  Only time will tell.

Posted by Elizabeth Forel at 1:58 PM