The Coalition to Ban Horse-Drawn Carriages  recently published a  study of horse disposition in  the New York Carriage trade, which revealed that an average of 71 horses a year do not get their license renewed ... 529 over 7 1/2 years. The study is linked from our home page www.banhdc.org.    There is no protection for the horses - the owners are

not required to be accountable for their lives.  If they are not wanted - if they cannot do the job anymore - they are out.  Some may find good homes - but some don't.  We believe many went on to auction but because of the way the system works - no records after they are not licensed anymore - there is no proof.  But we do not believe for one minute that the owners found homes for all 529 horses.

I'd like to tell the story here of two horses (who are part of this 529 number) who were saved despite their uncaring owners -- Dada who went on to become Lilly O'Reilly -- and Billy who went on to become Bobby II Freedom.  They had both been dumped at the New Holland kill auctions -- an auction frequented by kill buyers.   If you want more information about the study, please go to our web site www.banhdc.org.

DADA - I first became aware of this horse in 2006.  She had  recently been rescued by
Central New England Equine Rescue  in Massachusetts.  She  looked terrible.  She was a 19 year old mare and very tall at 18.2 hands.  She was 200 pounds underweight and her  body was filled with harness sores, which she could only have gotten working as a carriage horse.  We do not know how long she was in the carriage trade but her body showed the harsh effects of life
as a workhorse pulling heavy loads.   By the 4-digit number on her hoof - #2711 -  I was able to find out that she was a New York City carriage horse who had been owned by Clemente Cretella.  She had been sent to the New Holland auction to meet her fate and been purchased by a Boston carriage owner to be put to work.  She had been at a horse dealer's farm when she was rescued.

This is the section of the report that includes Lilly (Dada).  She is listed on the first line.The blue color indicates when the horse was no longer on the DoH rolls.   Click to make it bigger. 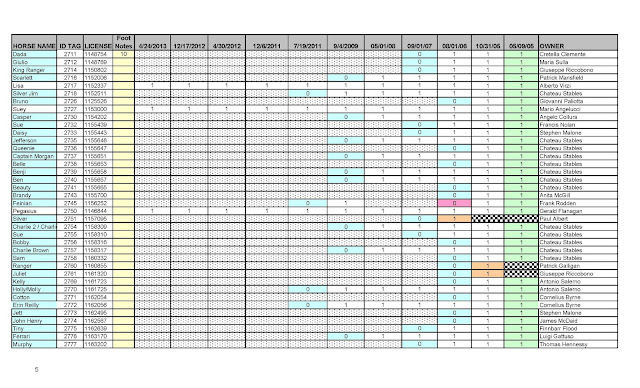 Changing her name to the pretty "Lilly O'Reilly" the good people at CNEER set out to work with her.   They wanted to help her to trust people again.  She was very withdrawn and depressed.  She was distant.  This is what Vicky of CNEER said: "Lilly still has not lost that sadness in her eyes.  I don't know how long it will take but it's still there - she has moments of interest, but that's all - little by slow she will trust us to keep her safe.  She has had a hard life I think - a very hard life.  And how she can even tolerate people is beyond me.  She can't be adopted until she is restored both physically and emotionally."

With CNEER's guidance and help, Lilly's luck was changing.   After all, their motto is  "making a difference - one horse at a time"  and they mean it.   This is a   link to our page with Lilly's story.  I was fortunate to get to meet Lilly a few times.  What a treat.  She and I are both NYC girls.  Although  withdrawn, we seemed to commune with each other.  I fell in love with her.

Sometime later she was adopted by an equine vet, Michaela and went to live with Cole, a quarter horse and Badonkeydonk, a little donkey.  She and Cole became very close.

This is what Michaela said about her new girl.  "Lilly is doing great.  She has come out of her shell like you wouldn't believe - her newest favorite game is taking everything out of my tack  box one item and a time when I am busy brushing her or picking her feet.  I swear that horse smiles the entire time she does it."

How great is that!  So it was with much sadness that I learned of Lilly's death one year after she got to her new home.  She and Cole got sick - he was strong enough to recover but she just succumbed in the field with her loving and caring family around her.  At least for the last few years of her life, she was a much loved being.  Micheala knew how much I cared about her and sent me a  lock of her mane, which I will always treasure.  She is honored on our web site.  (left side - scroll down)


BILLY - This is the horse who became the famous Bobby II Freedom.  I became aware of him on Friday morning , June 25, 2010  when I turned on the computer to read an e-mail about a "bay gelding ex carriage horse"   "Can you guys offer any info or know anyone who would like to save this gentle gelding from slaughter?  We have til Sat 6 p.m. to find him a secure home."

As I described in my article in One Green Planet, I immediately went into action reaching out to rescues to see if anyone could take him.  Equine Advocates in Chatham, NY happily agreed to do it and Billy finally arrived at their place on the following Monday.

This is the section of the report that shows Billy and his owner Maria Sulla.  He is third from the bottom - #2873 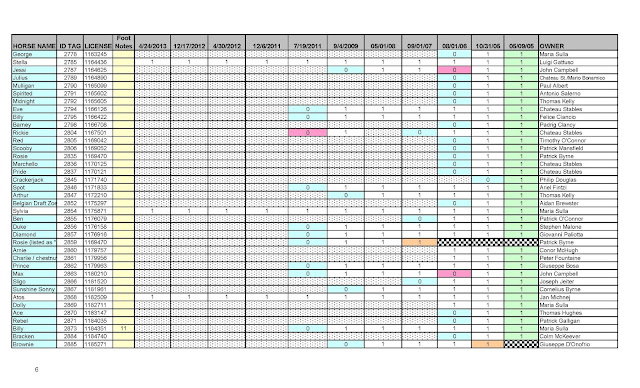 The press showed interest in Billy who immediately got a lot of  coverage - he was fast turning into a celebrity.  Referred to as an "it" by co-owner, Mr. Spina,  in the NY Times article, Billy  was finally living with his own herd and with people who loved him.  Take that!, Mr. Spina.

This is a link to a NY Times article that featured Billy's story and arrival at Equine Advocates.  The first thing he did was to roll on the grass - natural behavior for horses.  Susan Wagner, president of Equine Advocates, believes he probably never had a chance to do that before .  So heart warming.  The writer, Elizabeth Hess, has referred to it as "palpable horse joy."

Billy immediately was seen by an equine vet who determined serious lameness in his right front leg,  overgrown teeth and two kinds of worms -- not exactly  the condition of a cared for horse.  Find our more about Bobby on Equine Advocates' blog.  These  are some pictures of Bobby II Freedom when he first came and how he is today.