MUCH TOO HOT TO TROT

NYC carriage drivers love their horses?    You be the judge.

This has been a very hot summer with many days well into the 90s with  high humidity.

The two videos linked below were taken on the same day, August 4, 2012,  by two different people and of different horses.   It never reached  90 degrees on the hack line that day, which is the temperature at which the ASPCA officers can suspend the line and order the drivers to return their horses to the stables.  Humidity is not a consideration. 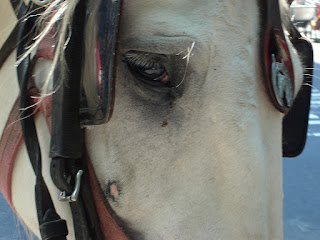 But that Saturday was  very humid and the heat index was 97 according to weather.com.  It was a steam bath.  Very uncomfortable and hard to breath for humans and just as difficult, if not more so, for the horses.

The first video called NYC Carriage Horse Exhausted  shows a carriage horse at the hack line on Central Park South  breathing hard - he is essentially panting.  His respiration rate is about 100 breaths a minute.  The normal respiration  resting rate for a horse should be 18 to 16 breaths per minute according to AgriLife Extension - Texas A&M System.  They also state that the rate for a fit horse who has been exercising should be reduced to  40 or 50 breaths per minute within 10 or 15 minutes.  The person who took this video had been watching for some time - more than 10 minutes.

The Horse.com also has an informative article about breathing rates.  Watch the video within this article -- How to Take Your Horse's Vital Signs.   As a bystander, it is very possible to check the breathing rate of carriage horses.


On the video, when asked  how many hours the horses have to work to get a break, the driver answered "seven hours."   Actually the law requires a 15 minute break every two hours, which is on paper only since it is impossible to enforce.   If the driver meant that the horses work seven hours a day, that is also incorrect.  Legally, horses may work nine hours a day, seven days a week.

The second video called Heat Stress was also taken on Central Park South.  This horse, too, was breathing hard.  Notice his ribs showing and the metal check rein, which prevents him from lowering his head.

In June, 2007, the NYC Comptroller's Office published an  audit of the Department of Health and Department of Consumer Affair's oversight of the carriage trade. This was one of their findings on p. 11:

"During the summer months, the asphalt where the horses line up becomes very hot.  Other materials, such as concrete,  would be easier on the horses' hooves.  In addition, on hot days, there is little shade for the horses, which could cause them to overheat."

Nothing was ever done about it.

It seems to me that if someone really cared about their horse, they would not subject them to this kind of abuse -- working in very hot and humid weather for hours on end.


Every time the carriage trade defends something like this, they drive the nail further into their communal coffin.