“Eat a slice of  horse meat. Don’t you see how skinny you are?”  said an Italian carriage driver in Rome to an activist protesting his trade. 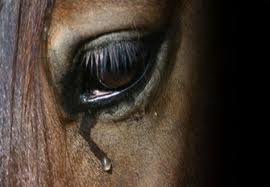 New York City is only one of the many cities where campaigns are escalating against the use of the inhumane and unsafe horse-drawn carriages for tourism.  Most recently there have been accidents in Victoria,  British Columbia; Mumbai, India,  Buenos Aires, Argentina, Galveston, TX, Philadelphia, PA and Atlanta, GA where a horse collapsed.   Rome also has its share of problems.  On Friday, July 27th, a horse collapsed from the heat near the Piazza di Spagna - Spanish Steps.  It was 104 degrees and very humid.  The drivers are not supposed to work in the hot and humid afternoons but ignore the law, similar to NYC.

On August 4, 2012, La Repubblica, one of Romes biggest newspapers,  reported on a riot involving activists and carriage drivers.  An English translation is below:

and here for the second video

Please let's all remember that horses are sensitive animals.  Like people, they do not like yelling, negative energy and stressful conditions.  Stuck between the shafts of their carriages, they are captive victims.  They can't go anywhere.

A demo protesting the exploitation of horses in downtown Rome ended up in a huge brawl waged  with pipes and bottles. Five people were injured and three were arrested. The police stepped in   just in the nick of time to prevent more serious consequences.

A huge brawl broke out in Piazza di Spagna: carriage-drivers vs. animal advocates. The battle was waged with pipes, sticks, and bottles and carried out by pushing, shoving, and punching. Luckily, the Carabinieri and city cops were on duty – otherwise the damage would have been even greater.

The event ended with five injured and three handcuffed and arrested. Although charges for instigating a brawl might conceivably be reduced when the case comes to court, the battle in Piazza di Spagna, filled with tourists and passersby eager to capture the scene on camera, will be remembered for a long time to come.

It all started with a surprise raid by animal advocates in downtown Rome. There were six carriages waiting for fares in the middle of Piazza di Spagna when a group of about thirty animalisti erupted in the square. Leading the group was Stefano Fuccelli, president of the PAE (the European Animal Rights Party). Bearing thermometers, the protesters measured air temperatures (a city ordinance states that horses can circulate in the city if the temperature is below 34 C or 93 F) and inspected the horses’ conditions. It didn’t take long for a fight to break out. Antonio Celli, one of the senior drivers, gave his advice to PAE national coordinator, Enrico Rizzi: “Eat a slice of  horse meat.. Don’t you see how skinny you are?” In a jiffy, the verbal exchange went physical. The result was an incredible brawl, which ended with five injured and three arrests.

Please support our campaign in New York City.  Like us on Facebook - No Walk in the Park.  Get our newsletter by e-mailing your address to coalition@banhdc.org.

you can't defeat an idea whose time has come

Posted by Elizabeth Forel at 10:14 AM