WHOSE TROUGH IS IT ANYWAY? the joys of being a NYC carriage horse 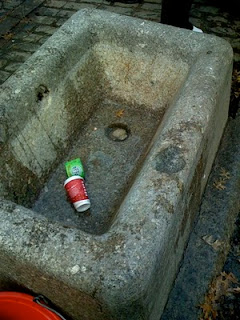 New York City’s carriage horses toil most of the day in Central Park. During the warm months, they have access to two water troughs - one just inside the park not far from Avenue of the Americas … the other closer to Fifth Avenue. The water is of questionable quality.

But even this questionable quality water is not available to the horses from October through March when it is turned off because the pipes freeze. The drivers are expected to carry buckets of water with them for their horse. Some do and some don’t. Who's checking.

Working horses need upwards of 20 gallons of water a day – particularly since they do not have access to grass. Do they get it? Only their owners know for sure – but we believe it is doubtful.

When the horses go into the Times Square and Lincoln Center area later in the day and through the night, there are no water troughs available. So good luck to the horses…

Most people who make their money off the back of an animal will ultimately come to exploit that animal … through lesser quality food; more work hours, cutting back on boarding costs – so they can have more money in their pocket. It is that nasty, greedy part of human nature that makes its appearance. That is apparent in the carriage trade in NYC. One can see the results of it - - horses with "one size fits all" ill fitting tack that is shared by other horses; horses that are pushed to work longer hours; horses with bad hooves; horses who look like they are not getting enough quality food. And these are just the things that we can observe. There is no telling how many need to have their teeth floated.

This video shows drivers trying to squeeze more time out of their horse even though it was above 90 degrees and they had been suspended for the day. Yelling “last call for a ride” to make more money even though they should have been taking their horse back to the stable.

So how can anyone with half a brain believe that the drivers l o v e their horses? Although, I guess love means different things to different people.

Intro 35A, the bogus bill that was signed into law in April by Mayor Bloomberg, originally had a section that addressed the water issue. The City of New York would pay for the new piping to make water available to the horses all year. None of us believed this ploy. If that section had been left in the bill, we knew the City would never address it because they have other priorities for their limited funds. They would have been subject to harsh criticism from the public – closing senior and day care centers to provide water to privately owned horses -- something that should have been paid for by the industry, which had just gotten a big rate increase.

The City also wanted to avoid another law suit since they had recently lost one concerning a law passed in 2002 that required animal shelters in each borough. Seven years later and there are still no full service shelters in Bronx or Queens. So the section about correcting the water troughs was quietly removed from the bill.

This is NYC, tourists - on the surface - bright lights, pretty stores, nice restaurants. Scratch that surface and you will see a draconian animal control system, which has a high kill rate for cats and dogs but pretends not to .... which slaughters resident Canada geese - thousands in Prospect Park ... and which is so mired in politics that horses have to suffer. But this is all behind closed doors. Remember what Gandhi said about cities and animals - "the greatness of a nation and its moral progress can be judged by the way its animals are treated." but who was he .... well only the man who was responsible for India's freedom from England.

But back to the Horses.

Would you drink their water? Horses are living organisms (as we are) with very sensitive digestive systems. The question to ask about the water available to the horses is if a person could drink it. I wouldn't! 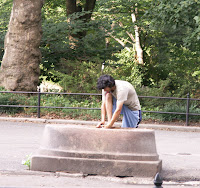 According to Holly Cheever, DVM, from the documentary Blinders: the Truth Behind the Tradition, these filthy communal water troughs are a veterinarian’s nightmare since horses can easily spread disease from one to the other. At different times, we have spotted people using this water trough to bathe and to wash dishes.

Again -- would you drink this water? No? Then why should the horses?

This is just more ammunition to back the argument for why this trade needs to come to an end. It is a disgrace to the city of New York to continue to hang on to this inherently inhumane industry. Tourists will not miss it.

A bill that is in the city council - intro 86A – would create a new electric / green vintage car business that would provide great opportunities for the owners and drivers and retire the horses. But politics is preventing it from moving forward. Speaker Christine Quinn, who has ultimate power in the City Council, is opposed to it and she has strong ties to the carriage industry.

If you think that that we are back in the days of Tammany Hall -- you would not be far off.

Boss Tweed would be proud.

Posted by Elizabeth Forel at 8:03 AM