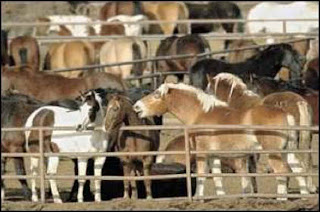 As reported in the most recent newsletter of the Coalition to Ban Horse-Drawn Carriages:

"Manhattan" is an 18 year old Belgian gelding who has been identified as a NYC carriage horse by the number engraved on his left front hoof. According to the web site of Gentle Giant Draft Horse Rescue in Maryland, he was rescued from a slaughter auction on January 19th. He had a condition known as Laryngeal Paralysis, where half of his vocal cords ceased opening enough to allow him to breath comfortably. He has since had surgery and is healing.

The web site indicates that the Rescue did some research and found that Manhattan last worked as a carriage horse in NYC in the fall. We doubt the accuracy of this information (since it was the carriage industry that probably furnished it) because it would have been 3-4 months later that he was purchased at the slaughter auction. What was he doing in all of that time? We believe that he was worked to exhaustion during the Christmas holiday period and then dumped. That time period makes more sense.

Of course this information flies in the face of the industry claims that none of their horses go to slaughter. Sure... 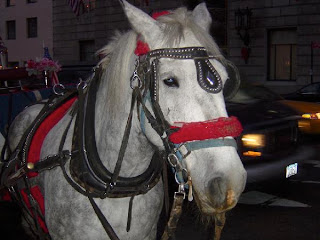 Well put, Coalition! The industry likes to say that they retire all of their horses who can no longer work ... that they have a place for them to retire.

But that would be physically and financially impossible.

Each year about 70 horses or 1/3 of the total number of horses in the NYC trade, leaves the horse registry managed by the Department of Health, which oversees the industry. Let's do the math. If the drivers would "adopt" all of these horses ... in five years, they would have 350 horses; 10 years - 700 horses ... and on and on.

Where would they all go? How could they afford to pay for their upkeep?

It simply does not make sense. And it is time to stop all the lies.

WHAT PROBABLY HAPPENS IS THIS:

- some of the horses who are "retired" - the favorites - are kept by the owners or they find a home for them ... but this is not the majority since keeping horses is both expensive and time consuming.

- the majority of horses who are no longer wanted are taken to auction or to a broker -- or maybe to the Amish - not exactly known for their compassion to animals. The driver/owner needs to recoup the value of the horse he is getting rid of so he can purchase a new one to work in NYC. This is a business after all, not a not-for-profit horse rescue. Selling the horse is the obvious solution.

- However, some of the horses going to auction are purchased by killer buyers who frequent auctions like New Holland and Unadilla and ship them off to slaughter.

- The driver/owners can say what ever they want about where their horse go. Without proof, it simply does not fly. This is the law in black and white. It is from the NYC Administrative Code - Title 17.

§ 17-329 Disposition of licensed horse. The department shall be notified of the transfer of ownership or other disposition of a licensed horse within ten days thereafter. Such notice shall include the date of disposition and if sold in New York city, the name and address of the buyer or other transferee and such other information as the commissioner may prescribe. A horse shall not be sold or disposed of except in a humane manner.

Notice that the law is written in such a way that it favors the industry. It does not provide a definition for "humane." And it only requires that records of horses sold within New York City be submitted to the Department of Health. But if the horse is sold outside NYC, sales records are not required to be submitted.

Now, doesn't this seem strange to you? Why would records be required for a sale in NYC when it is mostly drivers who buy each others horses -- and not required when sold out of state?

The "no sale records" required policy is necessary to protect the industry selling their horses at the auctions. They know that if this became public knowledge, it would not go over well with people. How many horses actually go to auction is not know because of this glitch.

But sometimes, as in the case of “Manhattan” we find out about it.

We are very glad Manhattan appears to be getting well.