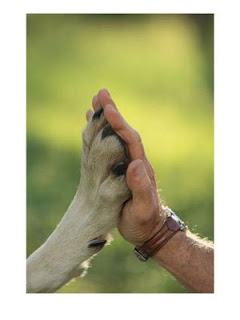 from New York Views - a Sporadical ... a blog by Lizzie

In today’s New York Times (4/9/09), Nicholas Kristoff proclaimed that “animal rights are now firmly on the mainstream ethical agenda.” The piece, entitled Humanity Even For Nonhumans is reprinted below. For those of us who have lived this lifestyle for years and have suffered the slings and arrows of detractors - this is wonderful news coming from such a conservative paper

… and yes it is .. when it comes to animal issues.

Some of the blog entries after this article referred to old religions like Buddhism and Jainism, which certainly revered animals. But they are not mainstream and Mr. Kristoff is recognizing this “profound difference from past centuries.”

In a testimony I gave at the January 30th hearing of the City Council Committee on Consumer Affairs regarding two pieces of legislation concerning the NYC carriage horse issue, I referred to an article published in the Harvard Crimson last year entitled Compassionate Campaigners how animal voters were shaping the 2008 presidential election. Written by Lewis Bollard, this opinion piece talked about the new electorate who care about animals, and how they see a politician’s attitude to animals as a broader reflection of his compassion and character. Bollard calls them news-savvy, socially integrated, and politically active. They are the people who sent over 300,000 e-mails to NFL Commissioner Roger Goodell successfully urging him to drop convicted dog fighter Michael Vick from the league. They’re politically active, and willing to use their votes to protect the defenseless. So it comes as no surprise that there was such wide spread interest in the puppy for the Obama family – and and not just any puppy - but it must be one from a shelter.

Yes the times are changing and the paradigm is shifting.

Why is it that these kinds of progressive and ethical ideas grab hold in the grass roots first and take so long to move through the government, corporations and those with the power and money.
------------------------------------------------------------------
April 9, 2009 OP-ED COLUMNIST Humanity Even for Nonhumans By NICHOLAS D. KRISTOF One of the historical election landmarks last year had nothing to do with race or the presidency. Rather, it had to do with pigs and chickens — and with overarching ideas about the limits of human dominion over other species. I’m referring to the stunning passage in California, by nearly a 2-to-1 majority, of an animal rights ballot initiative that will ban factory farms from keeping calves, pregnant hogs or egg-laying hens in tiny pens or cages in which they can’t stretch out or turn around. It was an element of a broad push in Europe and America alike to grant increasing legal protections to animals. Spain is moving to grant basic legal rights to apes. In the United States, law schools are offering courses on animal rights, fast-food restaurants including Burger King are working with animal rights groups to ease the plight of hogs and chickens in factory farms and the Humane Society of the United States is preparing to push new legislation to extend the California protections to other states. At one level, this movement on behalf of oppressed farm animals is emotional, driven by sympathy at photos of forlorn pigs or veal calves kept in tiny pens. Yet the movement is also the product of a deep intellectual ferment pioneered by the Princeton scholar Peter Singer. Professor Singer wrote a landmark article in 1973 for The New York Review of Books and later expanded it into a 1975 book, “Animal Liberation.” That book helped yank academic philosophy back from a dreary foray into linguistics and pushed it to confront such fascinating questions of applied ethics as: What are our moral obligations to pigs? John Maynard Keynes wrote that ideas, “both when they are right and when they are wrong, are more powerful than is commonly understood. Indeed the world is ruled by little else.” This idea popularized by Professor Singer — that we have ethical obligations that transcend our species — is one whose time appears to have come. “There’s some growth in numbers of vegetarians, but the bigger thing is a broad acceptance of the idea that animals count,” Mr. Singer reflected the other day. What we’re seeing now is an interesting moral moment: a grass-roots effort by members of one species to promote the welfare of others. Legislation is playing a role, with Europe scheduled to phase out bare wire cages for egg production by 2012, but consumer consciences are paramount. It’s because of consumers that companies like Burger King and Hardee’s are beginning to buy pork and eggs from producers that give space to their animals. For most of history, all of this would have been unimaginable even to people of the most refined ethical sensibility (granted, for many centuries those refined ethicists were also untroubled by slavery). A distinguished philosopher, Thomas Taylor, reacted to Mary Wollstonecraft’s 1792 call for “the rights of woman” by writing a mocking call for “the rights of brutes.” To him, it seemed as absurd that women should have rights as that animals should have rights. One of the few exceptions was Jeremy Bentham, the philosopher who 200 years ago also advocated for women’s rights, gay rights and prison reform. He responded to Kant’s lack of interest in animals by saying: “The question is not, Can they reason? nor, Can they talk? but, Can they suffer?” In recent years, the issue has entered the mainstream, but even for those who accept that we should try to reduce the suffering of animals, the question remains where to draw lines. I eagerly pushed Mr. Singer to find his boundaries. “Do you have any compunctions about swatting a cockroach?” I asked him. “Not much,” he replied, citing reasons to doubt that insects are capable of much suffering. Mr. Singer is somewhat unsure about shellfish, although he mostly gives them the benefit of the doubt and tends to avoid eating them. Free-range eggs don’t seem offensive to him, but there is the awkwardness that even wholesome egg-laying operations depend on the slaughtering of males, since a male chick is executed for every female allowed to survive and lay eggs. I asked Mr. Singer how he would weigh human lives against animal lives, and he said that he wouldn’t favor executing a human to save any number of animals. But he added that he would be troubled by the idea of keeping one human alive by torturing 10,000 hogs to death. These are vexing questions, and different people will answer them differently. For my part, I eat meat, but I would prefer that this practice not inflict gratuitous suffering. Yet however we may answer these questions, there is one profound difference from past centuries: animal rights are now firmly on the mainstream ethical agenda.

This beautiful photo above is from Sharing our Earth with all Species a blog by Carmen Mandel-Cesareo, a professional photographer, author and conservation advocate
Posted by Oliver at 10:13 AM

Thank you for crediting my blog "Sharing our Earth with all Species". Let us continue educating and devising win-win alternatives to end the carriage horse activity.