Many of us want to see an end to the horse and buggy trade in NYC for numerous, pragmatic reasons, which run the gamut from inhumane to safety considerations. These 19th century slow moving conveyances do not belong in a 21st century congested city.

But now, in order to save this self dubbed "iconic" trade, the NYC Tourist Board has appointed a new Tourist Ambassador to NYC ... and it is someone of whom the city can be proud. NYC's new Ambassador was chosen for this position out of a long list of very worthy candidates. He outshone the rest because of his outgoing and dynamic personality and his proven willingness to make threatening, intimidating and bullying telephone calls to companies that dare to put out an advertising campaign that might negatively affect his industry. Mr. Tourist Ambassador feels no compunction about calling people fascists if they protest the use of horse-drawn carriages. However, let's be very clear about what constitutes "fascism." It apparently is not when you bully restaurants from having fundraisers (as happened to my friends at the Coalition to Ban HDCs). And it is not when you try to close down a mild mannered photography show about carriage horses. There callers threatened to call the Cardinal and to have protests unless that show was shut down. And it certainly is not when you threaten journalists to kill a story. But, hey ... all's fair in love and war... right?

A man of many talents, Mr. Tourist Ambassador recently produced and directed this short video, which can be seen on Youtube called "Animal Rights Protest at Central Park On Valentines Day. Escorted by armed aspca officers." It is Academy Award material.

Notice how Mr. TA charmingly interacts with people on the street; his acclaimed skill in multitasking ... he is, after all, standing up while filming the protesters, which is not an easy feat ... not paying attention to the street. Notice how he is on a first name basis with some of the activists -- see just how really charming he is. The City did the right thing in selecting him to be the Tourist Ambassador.

However, since our multitasker was not paying attention to the road, he ran his carriage into a traffic cone, which identified a pot hole. But not to worry. He received no ticket, no citation. After all he has diplomatic privileges. And the ASPCA officer claimed to be looking the other way. Funny - seems like the Department of Consumer Affairs, Department of Health, Parks, NYPD and most Council Members look the other way also.

Notice also his quaint and clever use of nick names for activists in general - his favorite is "Petards." This child like behavior is what makes him so charming and the perfect tourist ambassador. It is like writing your name backward - Junior high school stuff. 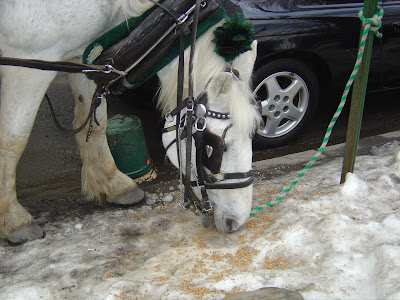 The drivers use the name "PETA" as generic for animal activists. But the play on the word "retards" is actually cruel and insulting to those who really have physical and mental developmental problems. But Mr. Tourist Ambassador is still in Junior High school mode so does not comprehend this kind of advanced thinking.

This very classy presentation on why tourists should take a carriage ride should be submitted to Frommer's. Oh, yes I forgot - Frommer's lists carriage rides under "NYC Experiences to Avoid." From Frommer's: "Pity those poor beasts of burden. They get dragged out in the heat (although not extreme heat) and cold (although not extreme cold) with a buggy attached to them just to give passengers the feel of an old-world, romantic buggy ride through Central Park. But the horses look so forlorn, as if it's the last thing they want to do."

JD Jackson of Texas wrote about the video "Since I saw the same ASPCA guy several times but with different people around him, I'm assuming the driver only filmed when he went by the spot where ya'll were protesting. That means not once or twice, but MANY times the driver subjected his different riders to his rant. Good. That ought to cut down on repeat customers. So much for a "charming" carriage ride."


Who is this masked man??
This driver had a starring role in a video showing him attacking Peta employees. See it on You Tube. 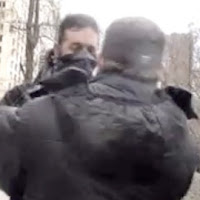 Can you name him?

you should let the police know about this, or someone who can identify the individual. at a minimum, it is grounds for a civil suit for assault and battery, probably some other stuff as well. it shouldn't be too difficult to subpoena the rosters from the carriage industry to identify this guy. while it would be a good deal of work to bring a civil suit, and the person probably wouldn't recover much, if any money, it would have a greater effect in deterrence, and bringing attention to this cause.

I dont see ANY assault and neither did the police. Make any more accusations of such and a lawyer for the Horse and carriage assoc. will be contacted. It is also highly recommended that you take the name written above the linked picture down. This is considered harassment. the police will be notified.

Dear Abigail: This is Oliver here and it is my blog. Tabitha is not only NOT Elizabeth, but Elizabeth does not comment on this blog. She is not omnipresent. She is much too busy running the Coalition and doing her newsletter and websites. She is thrilled to leave this up to us. I know you want to think our movement is just made up of Elizabeth, Elizabeth and Elizabeths, since it would make it so much easier for you to put one face on this movement, but you would be quite wrong. You must have seen the turnout at the recent hearing ... and you must have seen all the excellent fact based testimony that was given.

The person pictured is not identified but you obviously know who it is, which is why you want it down. This incident was an attack perpetrated on two PETA employees. It is quite clear in the video that the perpetrator shoved the two guys, used vile language and knocked them down to the ground. It was reported to the police. At the time, they did not know who it was.

So, Abigail, you would need to take this video off Youtube and PETA's web site. Try threatening them.