ARE THE NEW CARRIAGE HORSE HACK LINES
IN NYC A FAILURE?


WE THINK SO.  They are a  boondoggle -- all based on lies.
and, NO, the horses are not working "just in the park."

This is an eyewitness report of the misinformation and lies surrounding this issue.

LET THERE BE NO MISUNDERSTANDING.  The Coalition to Ban Horse-Drawn Carriages supports shutting down the horse-drawn carriage industry -- we do not support regulations because they do not work.  We started the campaign in 2006 and we never wavered.  There is no need for this frivolous, dangerous and abusive trade.  Further, with the extensive development on the far west side of midtown Manhattan, home to the last three stables, it is only a matter of time before the ones on W. 37th and W. 38th St. sell.  So what happens then -- with no future planning?  Stable owners retire; horses are sent to the auctions;  drivers are left jobless.   If any of those affected are reading this - you know who you are.  And you know what alternatives have been proposed and  used elsewhere.  Enough said.

There has been an ongoing movement for many years to shut down the horse-drawn carriage industry in NYC,  with good reason.  Besides the obvious concerns about the horses' welfare, it is a public safety issue.  There has been no law enforcement since January 2014 when the ASPCA gave up their Humane Law Enforcement division.  The carriage drivers have been getting away with violations since there is no one to enforce the laws.   They continue to make illegal U-turns; text and talk on their phones while driving in traffic; leave their horses unattended and untethered; overload their carriages and go through red lights.  But none of this seems to concern politicians as they turn a blind eye.

NEW HACK LINES:  Several months ago, Mayor deBlasio proposed that the hack line on Central Park South be moved to  just inside Central Park.  The first  proposal was for five locations, which eventually was reduced to three.  He was able to do this as an executive order because of the way the Administrative Code is written - leaving the location of the hack lines up to the commissioner, which ultimately means the Mayor.   NYClass had made large donations to Bill deBlasio's mayoral campaign and expected something in return.  This was one of the few issues that did not have to go before the City Council.

NYClass and several other animal welfare organizations praised this action and celebrated when it finally happened in March - claiming victory --  that the horses would no longer be in traffic and they would be in the quiet cool "tree-lined" park with shade.  Their supporters believed what they said and cheered along with them.   But what were they cheering about?  This was not a victory -- it was an illusion - like the emperor's new clothes, designed to deceive.

The Department of Transportation offered a period of public commenting and held a hearing on this issue.  Our organization was opposed to the new hack lines because it would not make much of a difference, possibly make things worse,  and besides, we believe in putting our energy into a ban.   But I did point out that none of the hack lines were in the shade; some of them were on an incline, which is bad for a horse's legs; and the drivers would still be on the street making their loops.  Further, more accidents occur within Central Park and on the streets used by the drivers than on the hack line.  Since 1982, we have recorded 103 accidents.  (drivers are not required to report accidents.) 19 of those have been at or near the hack line; 14 happened in Central Park; the balance of 70 happened on the streets in different areas.  The accidents included horses spooking, collapsing, crashing into buses and cars; dead horses.    This works out to be 81.5% of all recorded accidents occurring away from the hack line  - inside Central Park and around the city.  Only 18.5% occurred at or near the CPS hack line.

No one listened  - it was a sham comment period and hearing. The fix was already in.  I later learned that the Mayor's office did not even consult with or listen to their Dept. of Health equine vet who was opposed to the 7th Avenue hack line because it was on an incline.    Really shameful.  To exacerbate this issue, the carriage drivers used this as an excuse in a recent court document:  "will result in extra strain on the horses, resulting in repetitive-use injuries and arthritis, and ultimately shortening the working life of the horses that use this stand."  YET the drivers are still using this new hack line and putting those horses at risk.

THE PROOF IS IN THE PUDDING

WE VISITED THE THREE HACK LINES ON SUNDAY, APRIL 14TH AND
THIS IS WHAT WE FOUND … pictures and video below:

--   The hack lines are inside the park, located near Fifth Avenue, Sixth Avenue and Seventh Avenue.   They are visible from the street regardless of what the drivers claimed.  Besides, they have hired the most aggressive people to hawk their rides.  .It is impossible to walk down Central Park South without being confronted by these men trying to sell you a ride.

-- WORKING ON THE STREET -- STILL:  Carriages are still working in congested street traffic outside Central Park on Fifth Avenue, Central Park South and Central Park West.  This is how they complete their loop with passengers.  The comments about them working only in the park are not true.  Although I said this many times, it was ignored.  The groups who were behind this just wanted a win and donations. They also claimed that they never heard that inclines were harmful to a horse's legs, suggesting that it must be a lie -- further proof that those behind these new rules knew little to nothing about a horse's needs.

--IN TRAFFIC TO AND FROM STABLES AND LATER IN DAY TO TIMES SQUARE:  The carriages have always had to travel to and from their stables on the far west side of Manhattan, generally traveling up 10th Avenue, around Columbus Circle, onto Central Park South and then making U-turns to access their respective hack line.  Returning to their stable takes them back to Central Park South, around Columbus Circle and down 9th or 11th Avenue.  Nothing has changed.  Columbus Circle is a particularly  dangerous intersection and the site of several carriage horse accidents.

- SHADE?  HARDLY.  There are trees nearby the new hack lines - after all, it is Central Park -  but  none are close enough to provide any shade -- just as we said.

-- The Fifth Avenue hack line is the most orderly and near an existing  water trough.  Part of one of their loops consists of leaving the hack line, driving along the eastern part of the park and turning onto Central Park South.  (the old hack line) - Some continue west toward Columbus Circle.  Others go into the park at the 6th Avenue hack line, adding to the chaos. The area is defined by new stanchions - shown below.  They are not meant to tether a horse.

-- The Sixth Avenue hack line, although near a water trough, is chaotic.  There is not enough room for the carriages to line up with others passing by to complete their loops.  It is a mess and an accident waiting to happen.  Park Security is there -  but to keep the pedicabs out of the park at that location.  They have no knowledge of what the carriages are supposed to be doing or not doing.  I asked them.

-- The Seventh Avenue hack line is a mockery.  It is on an incline and the only way the drivers can prevent strain to the horse is to put a block on the back carriage wheel, which prevents the carriage from rolling backward.  This site was obviously proposed by someone in the administration who does not understand what horses need.   There is also no water trough.

-- The southern part of Central Park is very congested and filled with bicyclers, pedicabs, skate boarders, skaters, people walking, Park vehicles.  It does not have to be cars to make a horse nervous. We observed a horse carriage going west on Central Park South  where there was only one parked vehicle -- a hot dog vendor.  As the horse drew close, he began to get nervous and spooky.  Fortunately, his driver was able to control him but just goes to prove that we often do not know what kinds of things bother a horse.

- to add insult to injury, there is a new Citi bike area just outside the park where the hack line used to be. NYC has a contract with Citi bike.  People rent bikes and go into the park generally at 6th Avenue. Note to the Administration and Dept. of Transportation:   Midtown Manhattan does not need more bicycles.  There are too many as it is with no regulations creating a dangerous free for all. Please pay attention to the chaos that is better known as the southern part of Central Park.   It is not an amusement park.

-- the carriages are still on the street around the park, mixing in with traffic.  The only difference is that they cannot pick up passengers. 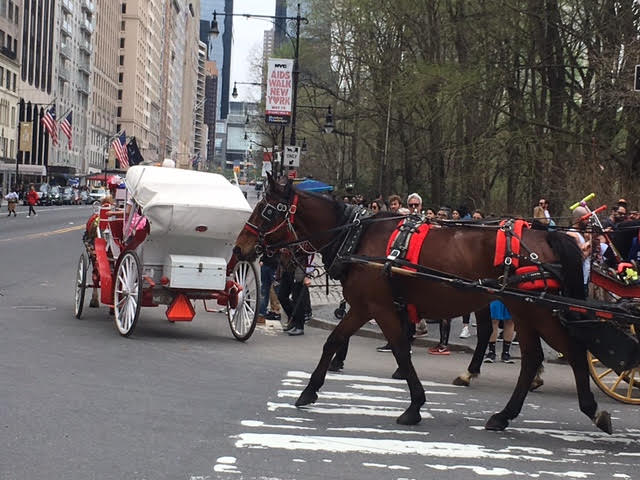 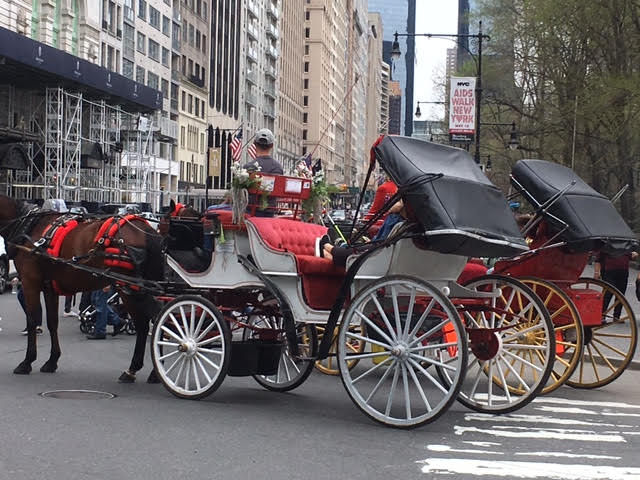 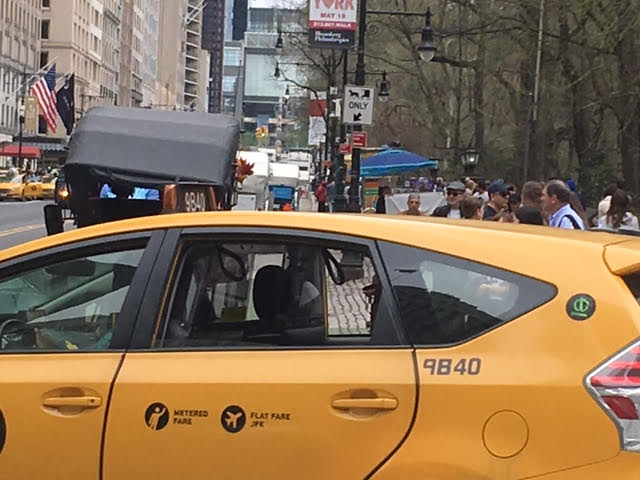 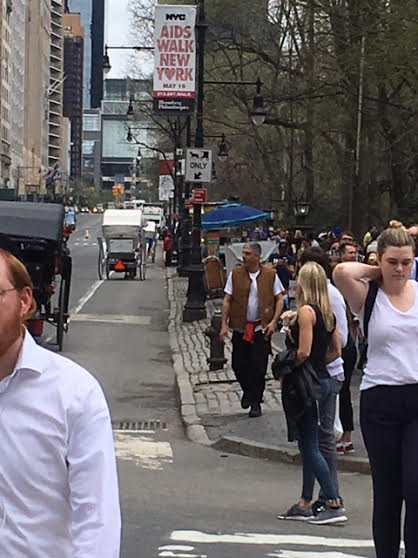 
carriages from the 5th Ave. and 7th Ave. hack lines finish their loop by going into the 6th Ave hack line while other carriages are parked waiting for customers. 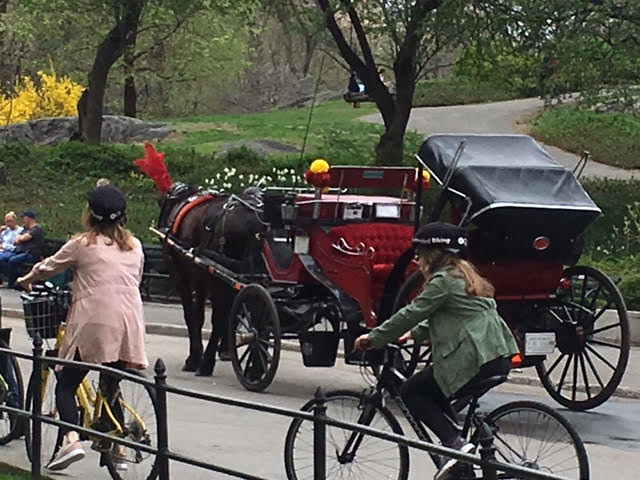 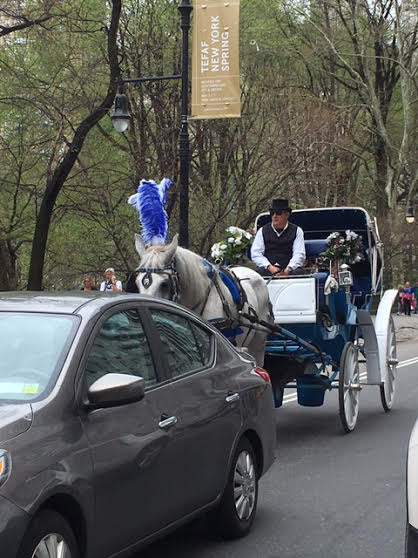 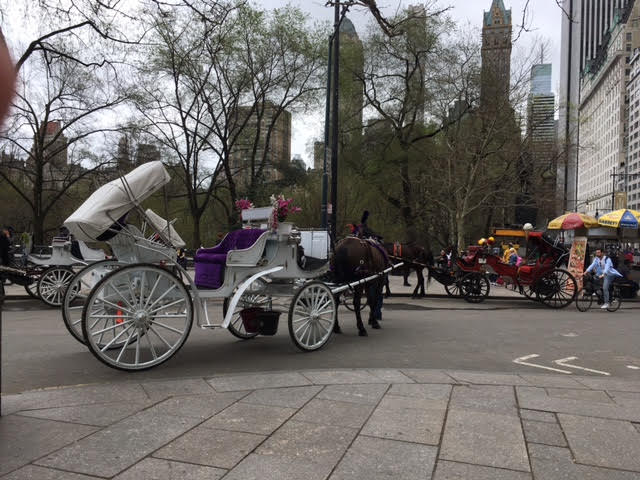 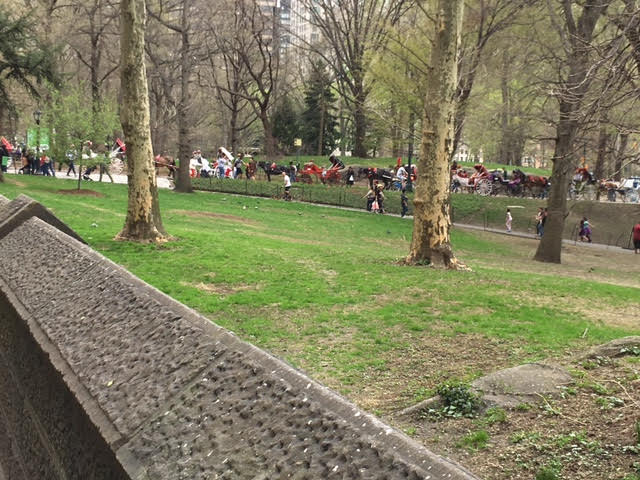 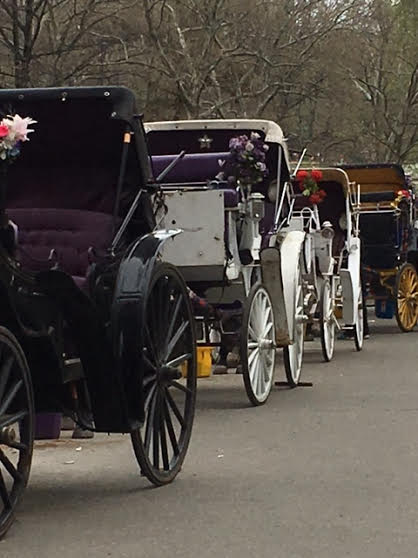 This scene with carriages working repeats itself many times during the day.

PLEASE NOTE:  We are not taking issue with the carriage industry on this matter.  The only thing that changed for them is that the hack lines were relocated to three different sites.  There was never any directive about them working only in the park.  For them, it is business as usual.

We do, however, take issue with NYClass and any other animal organization that duped their supporters into believing the horses were out of harm's way and in the "tree lined"  park.  You can see clearly that they are not … and then celebrating this as a victory.

-- Call (not e-mail) your Council Member and let them know that moving the hack lines did not do anything to help the horses.  Call the District Office -- it is generally manned.

-- Tell them the only thing to do is to shut down the industry.

-- Please question and verify any pronouncements about the carriage horse issue.  There are many false prophets out there.