BASED ON A LIE: THE FAILURE OF THE HORSE-DRAWN CARRIAGE BAN

BASED ON A LIE

"If you repeat a lie often enough, it becomes the truth" --  a profound and disturbing quote attributed to Joseph Goebbels, Hitler’s Propaganda Minister in Nazi Germany,  but also to Vladimir Lenin, founder of the  Russian Communist party.

This is exactly what happened with the defeat of the campaign to ban the inhumane and archaic horse-drawn carriage trade in NYC,  something that any caring, civilized people would have done long ago.   It is unmanageable  and an ongoing embarrassment to the city.

Those who wanted to defeat the horse-drawn carriage ban included the self-serving Teamsters and other unions, carriage owners and drivers, many politicians – and the media – mostly the NY Daily News – all with their own reasons – but getting behind the real truth had nothing to do with it. 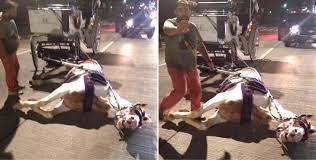 Loss of Good Union Jobs:  The main lie was that the shuttering of this trade would cause a loss of “good union jobs.”  That claim was not only not questioned by many Council Members but was used to make their case to people who believe everything they read.   They wanted union support when they came up for reelection.  Truth be damned.

Stable Land:  The second lie was that the real estate developers were lusting over the stable land so they could make lots of money putting up luxury apartment buildings.

Both of these lies resonated with people – job loss and unfairness by the real estate industry – David and Goliath.  But to those of us who know the truth it just confirmed that too many people believe what they read and hear and do not exercise critical thinking.  Other lies did not quite catch on as well but served as the cake icing to support the big lies – the number of horses who have died while working in the trade; horses would go to slaughter; the age of the industry to make it appear iconic; exaggerated size of stalls; horse vacations;  industry regulated by several city agencies with pages and pages of regulations; highly exaggerated financial contribution to the economy; safety being a non-issue.  Start with one lie – and if it catches on and the chumps buy it, then the sky’s the limit.

I have written about this many times in my blogs – challenging the media – especially the NY Daily News for perpetuating lie after lie to ensure that the carriage industry remains in NYC.   It has now been ten months since the failure of the ill-conceived bill that foolishly proposed building stables in Central Park but it seems that this phony issue is still rearing its ugly head.

Back on the Scene:  Now re-enter head of the Transport Workers Union, John Samuelsen.  In an October 23, 2016 op-ed piece in the NY Daily News he gratuitously attacked Mayor deBlasio whose administration once again turned the other cheek and did not fight back.    “Transport union boss rips Mayor deBlasio for ignoring everyday New Yorkers, warns labor leaders to rethink supporting him in next election.”

Samuelsen did a good deed last January when he came to the defense of the pedicab drivers who were being shafted by the City via the proposed legislation – but they never unionized so one wonders if this ploy was just to get attention.   He obviously has his own ax to grind with the mayor – and I say – have at it – but not on the backs of the horses please, promoting lies.  Does Mr. Samuelson have so little respect for his supporters that he will lie to make a point?

This is from the Daily News article and I have highlighted the lies with my comments below challenging them.

“Real estate interests, meanwhile, for years have been drooling over the West Side properties where the popular horse carriage drivers stable their beloved animals. Giving tourists rides through Central Park is a pretty good union job. It has allowed many men and women to put food on the table, and put their children through college.
What did de Blasio do? He repeatedly tried to prohibit carriage rides in the city and wipe out hundreds of jobs. That would have set the stage for real estate barons to finally buy the properties and put up more skyscrapers that 99% of New Yorkers can't even afford.
In seeking the ban, the mayor claimed he was concerned about the horses' health and welfare. Another crock. He never even bothered to actually visit the stables. And as the New York Daily News reported, independent experts said horses are "healthy, happy and well cared for."
As one veterinarian said in The News: "These horses are being treated with pride and compassion, often by their individual owners/drivers.  It never was about the horses. It was about Bill and his campaign donors and proxy attack dogs in the real-estate industry. The mayor clearly sided with the ultra-rich real estate industry (aka his campaign donors) over the trade union movement and all workers.”

Whoa:  This has been very successful propaganda.  Babes in the woods, de Blasio and his administration did not stand a chance.    De Blasio was never adequately prepared about the carriage horse issue and either would or could not challenge the lies coming from the unions, Council Members and the media.  He did not even know the language of the original bill, talking about the electric cars in a question and answer event in the Mid West.   He, like most Democratic politicians, are beholden to the unions.

Why:  Why was the NY Daily News out to get him – obviously using this issue as a metaphor for something else.   Perhaps it was because they never wanted him to be Mayor.

Unions, on the other hand,  are losing membership throughout the country.   By taking this issue on,  lying about the good union jobs – and winning – it was hoped to elevate their status.

Construction Union Jobs:  The far west side is part of massive new construction to gentrify the area.  To even suggest that real estate developers are drooling over the paltry stable property is embarrassing.  These are relatively small plots, which could bring the owners at least $10 million for each one if they decided to sell, which is their choice and not a land grab as some has suggested. 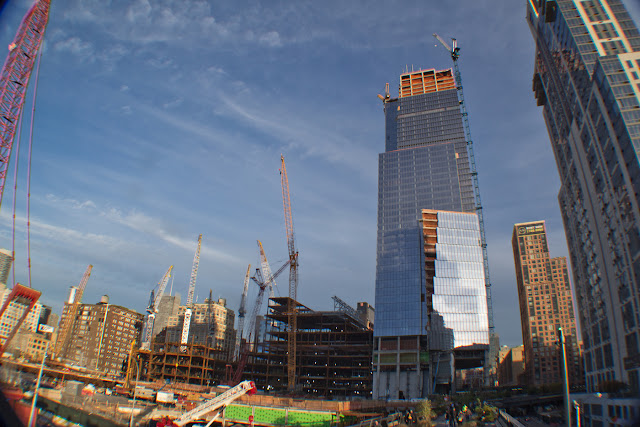 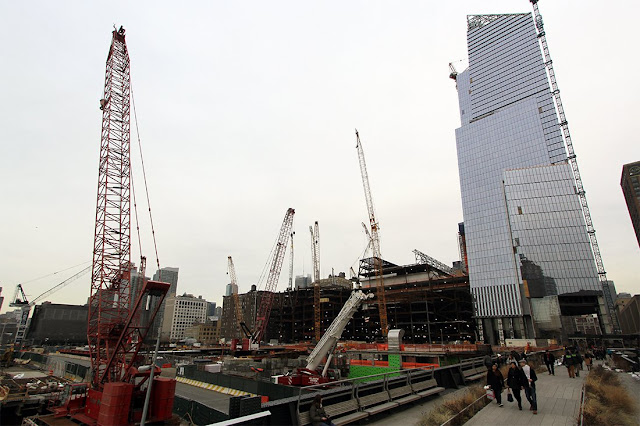 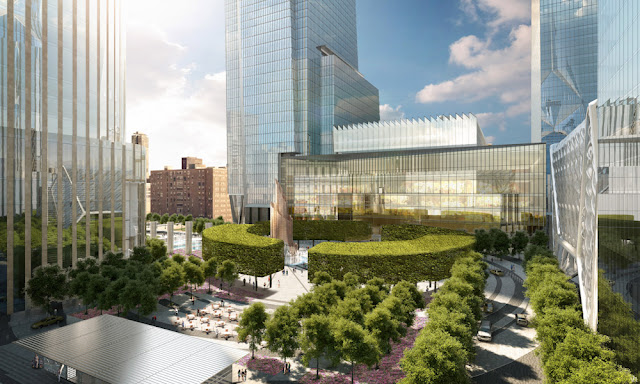 Hudson Yards is the biggest development project in the city since Rockefeller Center was built in the 1930s, translating into hundreds of union jobs.  New construction may well grow up around the stables, leaving the stable owners with devalued property.   The ultimate joke will be on them.
The irony over this silly dishonest claim is that new construction brings UNION JOBS.  Mr. Samuelson and his Teamster friends are being disingenuous. Unions have benefited greatly by the growth of construction all over the city, but particularly Hudson Yards and the adjacent areas.  The construction jobs in Hudson Yards has been a windfall for the unions.

Good Union Jobs for carriage drivers?   No way.  Of the approximately 244 carriage-driving licenses, only about 120 drivers belong to the Teamster local.  Without total participation, it is not a “union shop” and there are no benefits.  This means no medical, sick or vacation days – and certainly no 401ks to save for retirement.  So to even hint that this is a good union job compared to what the MTA workers have is insulting to all of us – not the least to loyal union members.   This ploy was to bring down Mayor de Blasio and he was not astute enough to fight back.  It also propped up the owners of the 68 medallions, most of whom pay little in city income taxes because of their extensive deductions in a cash only business.

As for those “independent” experts who claim the horses live a great life – name them please with all of their affiliations.  We do know that the “study” that showed how calm city horses are was paid for by the carriage trade and only tested on a handful of horses. 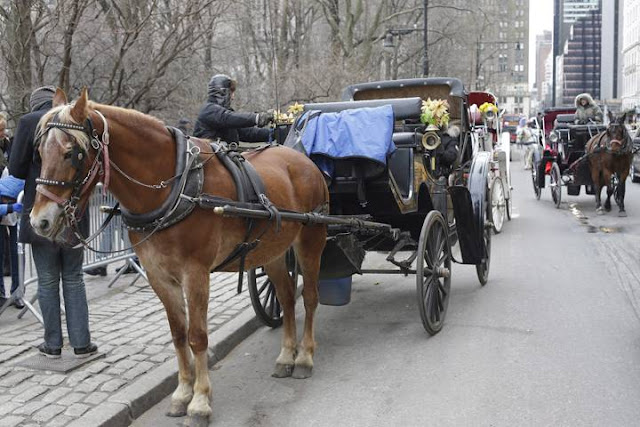 NOT a good union job.


About unions:  I generally support unions – they helped create the middle class.  But this is not about the value of unions - it is about the ethics and morality of lying to get your way, which must be indefensible in a civilized, democratic society.   The truth is that unions are in deep trouble all over the United States.  But lying to get attention will not ultimately help.

Yes, I have had the "audacity" to criticize the unions here - but please – no death threats.  It has happened before.  Vicious comments on the blog - anonymous or not - will be deleted and/or reported.  You will not get your 15 minutes of fame on my dime.

This is a link to the accident record we have kept.  It does not include the “accident’ that occurred on Labor Day weekend, pictured above,  when a driver forced his horse to make a turn and the horse collapsed.