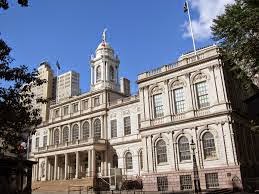 Council Member Eric Ulrich was first elected to the  NY City Council in  2009.  He is the only Republican from Queens and represents Rockaway Peninsula as well as South Richmond Hill, Howard Beach, South Ozone Park and Woodhaven.

Queens is also a fairly conservative borough and home to many carriage horse drivers.  According to his City Council page, Mr. Ulrich is only 28.  This means he was  7 years old when the  last big fight to control and regulate the out of control carriage business occurred.  This resulted in the drivers being able to work their horses in many parts of the City, with no thought to public safety.   The Mayor at that time was Rudolph Giuliani, followed by Michael Bloomberg, neither a friend to animals.

As a Republican  Mr. Ulrich's support for a ban on horse-drawn carriages was not expected, but at least he was not trying to hurt the administration by spilling his guts to the Daily News just for attention.  Well that all changed. On Friday, February 13, the NY Daily News published this article telling how Mr. Ulrich decided to speak out.

I sent the following e-mail to CM Ulrich's chief of staff about this article:

I make reference to the article in the Daily News on Friday, February 13th about Council Member Ulrich making the decision to oppose the bill to ban horse-drawn carriages.

Please show this e-mail to the Council Member.  I understand that everyone is entitled to their own opinion - but as the old saying goes - not to their own facts.

This is the quote attributed to the Council Member:

"I believe that every New Yorker, not only carriage drivers, should have access to a good paying job, retirement security, and the opportunity to give their kids a better shot at life. That is what the American dream is all about and that is what is [at] stake here," he said.   And this:  "cannot, in good conscience, vote for any legislation that would deny hardworking people a chance to earn a decent living."

I agree with the Council Member.  Everyone should have access to a good paying job with benefits -- just like members of the City Council do.  But the NYC carriage trade is not that, which is what the Council member is referring to in this context.  I have been working on this issue consistently since 2006 but before that since the early 1990s.  We have tried for years to shut it down because it is inhumane, unsafe and operates on a laissez faire basis.  The authorities have looked the other way.  My research is based on truth, talking to people who previously worked in the industry.

GOOD PAYING JOBS:  There are about 250 people who have a license to drive a carriage; not 300 or 500 or even 1,000.  Of those 250, about 60-65 are the owners who own the 68 medallions.
- part timers or others who hold on to the license because it is inexpensive -- much cheaper than the license to drive a pedicab.  This is because the carriage trade has always had access to the City Council members and those in high echelons of government.  After all, it all began with former Mayor William O'Dwyer in the late 1940s.
- one woman operates her business in Cape May, NJ and no longer works in NYC
- another owner lives in Sicily and comes to the city a few times a year to collect his money.
- others whose names I recognize live out of town, no longer work in the industry and keep the license to pad the numbers.
So Councilman -- this is what you are really supporting because you have some disagreements with the deBlasio administration.  Corruption, paltry jobs, questionable union practices -- workers who are forced to go on Medicaid because their incomes are so low they cannot afford insurance.

Did you ever question why the media is mostly on one side of this issue?  They are certainly not the experts.

You still have the opportunity to do the right thing and be on the right side of history and support this bill; to make this a more humane city  - not just for animals, which many people care about  - but for the exploited workers.  I believe people look at those in politics with new respect when they change their mind and admit that they were wrong.  It is a sign of character.  Former Mayor Bloomberg did that when he spoke out in favor of the pedicab business when  the carriage owners were trying to ban them.

If you want to read the truth about any of these issues, you will find it here.  We are a totally volunteer, grass roots organization, originally founded in 1994 and then focusing on the carriage horse issue in 2006.  No salaries - no conflicts of interest.

Posted by Elizabeth Forel at 7:21 PM

This is an amazing article, precise and to the point. If Council Member Ulrich actually cares about the difference between right and wrong, and facts vs lies, hopefully he will end up supporting the bill.

Ulrich's immaturity is showing. He has no breadth of understanding as to when a seemingly good thing is born from what is evidently a bad thing. In this case, some people maintain jobs at the expense of animals who are enslaved, exposed to deadly vehicular traffic, and pull weight for long hours under adverse weather conditions. I reckon it will take many more years for this boy to grow into a man. Let's vote him out of office in the meantime.