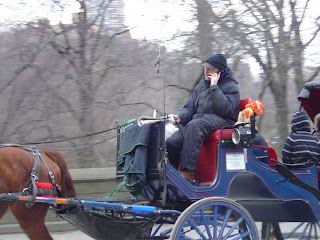 New York State Governor Andrew Cuomo is planning to introduce legislation to “penalize drivers who text, post on Twitter or otherwise distract themselves with handheld electronics while at the wheel” according to the the NY Times article Cuomo Seeks Tougher Laws for Texting While Driving, ***dated June 10, 2011.

According to the NY Times "The governor said he would propose upgrading so-called distracted driving from a secondary offense to a primary one, meaning that police officers could pull over drivers solely because they are spotted pecking away at their phones. "

This chart shows how other states deal with this issue. Most are actually stricter than NYS.

So what about NYC carriage drivers? They work on the streets in heavy traffic -- including Central Park South, Ninth Avenue, Times Square. They are guilty of not only using handheld cell phones while driving their carriages, but also reading newspapers and magazines and turning around to take pictures -- all while driving. A new law that was passed last year requires all new carriage drivers to have a NYS drivers’ license but it allowed those who do not have a license to be grand fathered in.

So there are still carriage drivers on the street who do not have a NYS drivers’ license. Last February, the Department of Health actually proposed new regulations that would prevent drivers from using cell phones and engaging in other distractions while driving. But oddly enough, they rescinded them. 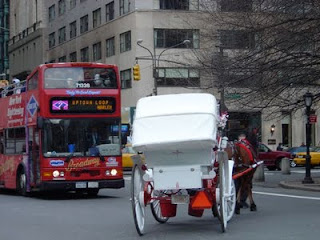 Apparently the carriage drivers are above the law because they continue to engage in these kinds of infractions where, if they had an automobile, they would be fined. They also make U-turns on Central Park South in the middle of heavy traffic and the authorities look the other way.

It must be nice to have friends at City Hall.

So what is the problem here? Why are they still allowed to not pay attention while driving -- to engage in unsafe practices and get away with it?

They put everyone in danger - themselves, other cars, pedestrians - and of course, the horses.

*** -- if the NY Times link does not appear it is the fault of Google. If you want to read the article, please do a search. Sorry.

Posted by Elizabeth Forel at 10:35 AM

I say, put this at the forefront. They shouldn't be above the law. This poses a serious safty issue.