THE LAW, THE CARRIAGE HORSES AND THE ASPCA – and why we need change 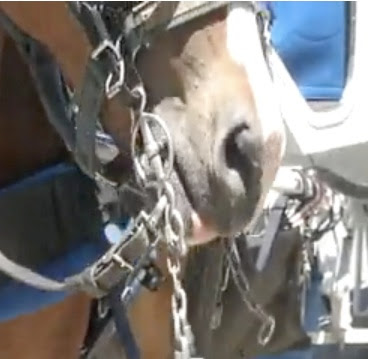 Horses Suffer Greatly in the Heat.


For the second day in a row, NYC passed the 100 degree mark … 101 degrees Wednesday … 103 Tuesday. The heat wave, which has settled over the east coast, began this past weekend with temperatures climbing into the high 90s. Above average temperatures are expected to continue through the end of the week. This was no secret. Everyone knew.

So what happens to the carriage horses during a heat wave – in NYC and Philadelphia, for example?

In NYC The governing law, which is part of Title 17-Health – NYC Administrative Code states that “carriage horses shall not be worked whenever the air temperature is 90 degrees Fahrenheit or above.” There is no consideration for humidity. The official air temperature is actually taken at the hack line by an ASPCA Humane Law Enforcement officer (HLE) using a special thermometer. It is not from CNN, weather.com or NY1.

However, there are several problems with this law, but the most inhumane is this:

The law allows the drivers to begin work at 10:00 AM, leaving from their stable about ½ hour before. If it is expected to be over 90 degrees on a particular day, the drivers are allowed to work, until it reaches that temperature – probably for only a few hours. When there is no business, the horses just stand on the asphalt wearing metal shoes, under the hot sun where there is no shade. But as soon as it reaches 90, if the HLE officers are at the hack line, the driver is told to take his horse and carriage back to the stables, over scorching hot asphalt, under the blazing sun. The stables are between 1 ½ and 2 ½ miles away. It is a thoroughly unnecessary and debilitating trip that could have been avoided if the ASPCA had not allowed them out in the first place.

The ASPCA has it in their power, as one of the oldest humane societies and as the enforcer of humane laws in New York State, to totally suspend the trade when conditions are dangerous for the horses. Horses can suffer from heat prostration and heat stroke. In 1988, a particularly bad year, three NYC carriage horses succumbed to heat prostration and died, embarrassing NYC and tarnishing the industry. Click here for more information.

Philadelphia suspended their carriage trade both yesterday and today. They did the smart thing. Click here to read the story.

But Not So the ASPCA.

I sent two private e-mails to the head of the Humane Law Division - dated July 4th and July 5th - asking the ASPCA to suspend the carriage business during this heat wave. An e-mail from the SVP of Humane Law, not intended for me, was intercepted – i.e. she sent it to me by mistake. She told her minions to ignore me … that I “misconstrue.” How is that for arrogance? They listen to no one and assume that no one knows as much as they do.

My letter pointed out that if the drivers are allowed to go out in the morning, knowing that in only a few hours, the temperature will be above 90 degrees, the horses will need to make that journey back to their stables over scorching asphalt under the blazing sun, hotter than when they first came out. While at the hack line and later walking, they will be standing on asphalt that may be as much as 200 degrees Fahrenheit (as reported in the New York Times 7/28/89) and their micro environment may be 45 degrees higher than the ambient temperature, according to a Cornell study from the mid 1980s. Add that to a lack of shade on the hack line and the horses suffer.


On both days, the ASPCA officers stated that they were out in the park taking the temperature to see if the horses would be allowed out. They had to know it would be blazing hot these two days – but unlike Philadelphia, they allowed the drivers the opportunity to get an hour or two in working. I have been told that the horses did not go out on either day because the temperature reached 90 degrees early … but the possibility was there because they did not suspend it in its entirety.

This is what this same SVP said to someone who complained to them:

"We can and are suspending whenever the temperature is above the legal limit. We are also monitoring to help ensure horses aren't out during these periods."

Well how about totally suspending the business for these two days? How about doing what Philadelphia had the foresight to do? How about putting the horses first!

On second thought, the “letter of the law” may not be exactly right. Rather it may instead be that the ASPCA interprets the law in such a way to make it easier for the drivers to work their horses. For example, according to the law, horse-drawn carriages are not allowed to be “driven or operated” in the Times Square area before 11:30 PM from Monday through Saturday and not before 7:00 PM on Sunday. Period. No exceptions. The law is very clear on this. This is the area south of 57th St., north of 42nd St., and between 7th and 9th Avenue. Click here for the law.

The ASPCA representatives have told me that the drivers are only restricted from going into this area if they are working. But if they have no passengers, it is OK.

WRONG! That is not what the law says. The intent of this law was to keep the carriages out of an extremely congested area until there is less traffic - after 11:30 or 7:00 on Sundays. Times Square does not provide a direct route back to the stable – not by a long shot. Any driver in this area when they are not supposed to be is looking for a passenger.

So why does the ASPCA interpret this law liberally and incorrectly on the side of the industry? Why do they not take a stand and suspend the industry during a brutal heat wave?

Why was the ASPCA not represented at the Mayor’s bill signing of Intro 35, the industry bill, making it appear that they were in favor of this bad bill even though they claimed they weren't?

Note: I really would prefer not to criticize the ASPCA publicly, but I am compelled to do so for the horses ... to let New Yorkers know a little about what really goes on. Someone has to speak for these exploited horses. Any organization that has that much misused power must be challenged to do the right thing.

for more information about horses and heat read this article Heat Stress: Too Hot to Trot by Jennifer Nadeau.

Posted by Elizabeth Forel at 6:25 PM

"But as soon as it reaches 90, if the HLE officers are at the hack line, the driver is told to take his horse and carriage back to the stables, over scorching hot asphalt, under the blazing sun. The stables are between 1 ½ and 2 ½ miles away. It is a thoroughly unnecessary and debilitating trip..."

You are crazy- the law is in tact & is helpful. It is not DEBILITATING for a horse to walk 1 1/2 miles in the heat- I bet there are shoppers all over NYC doing it with a smile! Some of them toting DOGS! No wonder you are being ignored! You need to make sense if you want to make a difference.

The conditions that carriage horses are forced to live and work in are absolutely abhorrent. At Manhattan Mini Storage, we are happy to support The Coalition to Ban Horse-Drawn Carriages. Whenever someone rents a storage unit, we donate $25 on their behalf to one of five local charities. If you are interested, you can read more on our program here: http://www.manhattanministorage.com/do/charity
Hopefully, we will soon see an end to this antiquated practice.

The ASPCA should have suspended the carriage industry from operating during this brutal heat wave. They could have done so, and the fact they they chose not to is very upsetting.