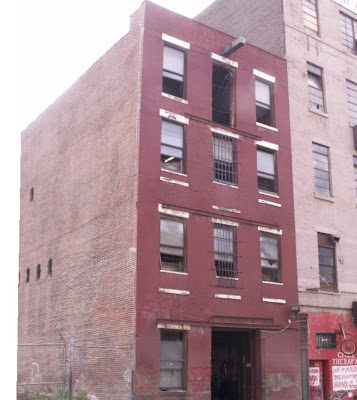 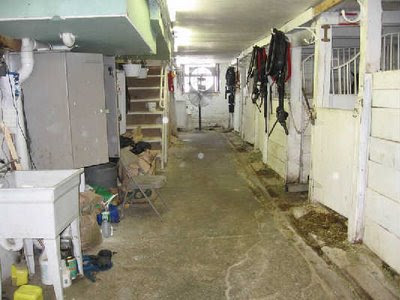 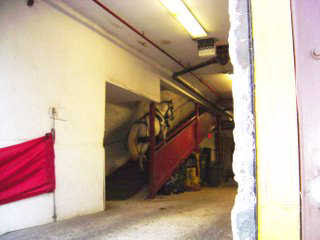 Posted by Elizabeth Forel at 7:18 AM

Is that a pre-war? And, do those windows have a northern exposure, or southern? I can't quite picture the finished "townhouse" but I know he'll do a great job with it. Next thing we know, it'll be featured on the "Apartment Therapy" blog.

Hi Alice: Oliver here. I think you misunderstood about Liam. By saying he would move in tomorrow, he pretty much would keep it as is - other than just a few knick knacks as Tabitha said. The "airy" windows at the front of the building have a northern exposure; the tiny ones to the east are actually faux windows. It is the new trend - holes to look like windows. Liam was crazy for them. They give a lot of privacy and he is a celebrity you know.

Gotcha. A new twist on the "Shabby Chic" franchise. Hell's Kitchen Rustic, maybe. Thank goodness for the stylesetters. I hope his constitution is strong so that he can avoid getting sick from the poor air quality in the stables.

I've heard about those faux windows. A lot of bang for the buck for those of us on a budget.

I hear that Liam intends to mount a trophy deer head on the wall of his new place in Hells Kitchen. He had been holding on to this memento ever since he mowed down the poor helpless creature while on his motorcycle a few years back.

Liam has a history of doing anti animal things. His roles as an actor are just that: Roles.

I just saw Blinders recently and although I had already suspected that the industry was inhumane and outdated, it was appalling to learn of the extent of the abuses occurring.

I posted the trailer on my blog, and found it interesting that the post almost immediately attracted industry-defending commenters attacking PETA and calling those of us who care about humankind's treatment of our fellow species "humaniacs"...

I would love for some of you to continue the debate with her!

I recently spoke with a horse enthusiast who made the point as efficiently as I think possible: The desire of unaware tourists to partake in an archaic custom is paltry excuse for even the most minor of abuses (and in this case, the unfairness and mistreatment is rampant)... The mere existence of an industry structured around this inhumane practice is a paltry justification...

I must admit to no small bemusement from those who claim that they, "would do", some hypothetical action, but never actually undertake said action. I'm always curious as to under what circumstances they would live up to their words.

They tell us that they "wouldn't hesitate", they "would", they "will", yet, never seem to do so! So, it would seem that conditions are never appropriate for them to take the action that they so fervently say they will!

Hollywood star, Liam Neeson, avers that he would "move in tomorrow" to the stables of the New York City carriage horses.

Since, to anyone's knowledge, Neeson has yet to relocate his Lars and Penates to a stall in the home of this "iconic" industry, can we be forgiven if we wonder just what circumstances would impel Liam to take such an action? After all, it's been wisely said, "talk is cheap"!

Normally, I would not run barefoot over broken glass, yet, would do so, if pursued by a pack of howling wolves, in full flight from Sarah Palin. Likewise, I too, would curl up under a horse blanket, in said stables, if my only other choice were exposure to a blizzard. Is this what Neeson means when he states that he "would move in tomorrow"? As would we all, faced with such a choice!

Let's face it Liam your millionaire self is NEVER going to spend even one night in such depressing accommodations, save for publicity purposes.