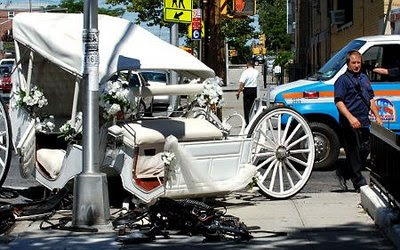 Double Trouble? or unwitting victims of horse slavery? (hint - it's the latter.)

So once again, we learn that two horses spooked while waiting to deliver a bride and groom to their "fantasy" wedding. Romantic? hardly. What was it this time -- a basket ball, a loud noise; rustling leaves? These 1,500 pound horses nearly caused a very serious accident after they tore down the street in panic, jumping on to a car. That car belonged to a family of several adults and one baby who narrowly managed to get out of the way. It is not known how badly injured the driver or horses are -- although the newspapers seemed to play this down.

City Council: are you paying attention? Or are you too interested in plotting how to extend term limits or abolish them altogether so you can keep your jobs? 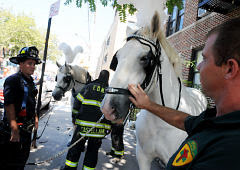 Just the other day, an elderly man was knocked to the ground by a spooked police horse in San Francisco at Candlestick Park. The horse panicked when a plastic bag blew in his face and got caught on his bridle. He tore around the parking lot, knocking several people down. The 49ers fan died several hours later.

City Council: Pass Intro 658 - the bill to ban horse-drawn carriages. It is past time to do the right thing. It's only a matter of time before a person dies in NYC. Then who's going to say "I told you so!"
Posted by Elizabeth Forel at 5:06 PM